Yes because the game really gets that "kick, pass and rush" feeling from the old top-down footy games. It's all there: curbed passes, great runs, well placed shots, but now in 3D (with support to 3Dfx cards). The view still is top down (with a handy zoom in / out function), but replays are played from different camera angles . There are enough leagues (with real teams) to keep everyone happy (actually the leagues only have the default teams, you can play with Celtic and Rangers on the EPL) , and the teams can be edited with a powerful and easy to use editor. You can add up to 255 teams, 16 players each, with 7 individual skills and own skin and hair colour (you can even create grey or green alien teams). Also worthy of mentioning, you can have multiple databases, loaded within the editor. There is also a Tactics editor, where you can edit and create the tactics for the game, and if you try enough, you can smoke the computer's tactics with good player placement. As for gameplay... obviously it is easy to learn (players have the ball glued to their feet, unlike Sensi) and quite simple - low ball and high ball, but still you can make quite realistic - and effective - plays, like crosses, one on ones, shots and lobs from outside the area (hello FIFA 2001), and even sit down the goalkeeper with the best George Best style with just some turns of the directional keys or simple button taps. The ball flows freely, and you can play a few games without getting tired. Now, is there any point on scoring great goals if you can't save them to brag about later? The game allows you to save replays by just pressing a key and inputing a name... and now, the cooler part: saved goals (as well as highlights of the current session the computer saved randomly) are displayed in the main menus, that are no more than a simple window on the top corner. This is a problem with some bigger names you give to replays and saves - just keep that in mind, and everything goes fine. In game texts are on a TXT file, so you can just translate the game to your mother language (I just experienced some problems, so backup your files if you want to give it a try).

With so good things, what went bad? Support, support, support... the game had some annoyances like recognizing a kit with blue and white stripes different of one with white and blue stripes. The managing options (buying / selling players) from Sensible Soccer was also left out. The season mode, although good, seems too shallow and misses some stats. The biggest flaw is the lack of on-line gaming, as a simple game like this (min. requirements P90 mhz) could use some on-line functions, and with exportable replays, team databases and tactics as easy as 1-2-3 would surely be a success with the on-line community. The editor sometimes duplicate teams when you delete teams like mad, so editing teams is a better option than deleting and adding. On other times, when you start a game, you get some of your (or theirs) players injured. Sound is dull, but appropriate.

In brief, few flaws, but annoying enough to bring down the rating.

The game failed in the market for the reasons stated, plus the price of this simple game was the same of PC footy giant FIFA 2000. However, the "old game" tag certainly make it a favourite for Cover CD in mags (where I actually got mine), so if you see it in a under-budget price, give it a try, you'll surely enjoy it for a long while. I rate it 7/10. The starting 11 is there, but the tactics have some flaws coach Iridion didn't sorted out. IMHO could have been a legend on the market of soccer games. 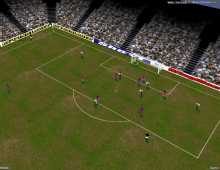