By the turn of the millenia, the ISS franchise was split into two games: Pro Evolution/Winning Eleven and ISS/Jikkyou. While the first are native to the PSX formats, featuring a almost perfect and acclaimed gameplay, ISS carried the gameplay and options from the N64 versions (64, 98 and 2000), with much poorer gameplay and no Master League (altough 2000-N64 had that nice RPG-ish "Career mode").

The game is a complete port from the console version (PS2, figures), you are forced to play in a 640x480 resolution (altough I'm not a graphics freak, the lowly resolution gave me problems when the ball is being played in the lower bottom of the screen, with all overlays default), you get nice messages like "Saving, Please don't turn off the PC Console" and there isn't a single mouse/keyboard-typing control - if you need to enter text, you must do it "console style".

Players are customizable in almost every aspect possible. Name, "call name" (how he will be called by comentators), body build, Kicking foot and footwear, faces (some have "real faces", going from recognizable to terrible), with 16 predifined faces, where you can change the outline (which affects nose, mouth and jaw), skin, beard and hair. As far as stats go, it's good to see that the performance of players are affected by more than just their "numeric" abilities, but also by their physique (an Owen style player will be faster than a 2,00 m, 100kg monster, even if both have 10 on both running and sprinting) and by their "specialties". Each player have 10 slots that can be filled with abilities that determine how well (or bad) a player will react in certain ocasions. This, between much other things, will determine if the player is able to shoot well outside the area, their spot kick abilities, if he is rarely or easialy injured, if he is a specialist on coming out of the bench and turn the tide of the game, etc. More than specific stats, it's having players with plenty of these (positive) attributes that makes the difference from a good to a top class team. There are over 200 slots to store edited or created players, which should be enough.

Graphics are sub-standard (aren't better than the ones seen in EA's World Cup 2002, for instance) and the framerate chokes when there are more players on screen, like corners and freekicks. The engine clearly could have been a bit optimized to run on PCs, which by nature is a platform gazillions of times more flexible than consoles. Animations go from poor to excelent, specially the goalkeeper saves, which I dare to say they are the best ever seen on the PC and overall ball passing/shooting. The poor side comes on headings, which appear to be handballs in most ocasions, and some falls after collisions look too fabricated ehile others not natural at all.

However, if there is a thing where all other PC games fall in their knees in front of ISS 3 is the animated cut scenes or "off play cinemas", as EA used to called them. Before the game you see all the players lined up in the access tunnel, The goals are all celebrated in a realistic fashion, with ocasional glances of the bench, cardings, altough only have a couple of animations, they all look realistic enough, without the dramatizations in the FIFA series (well, except one where the coach seems to want to have a piece of the referee for a yellow). There are also cut scenes before corners (players pushing, goalkeeper giving orders or calling players back) and free kicks, which give the game one immersive atmhosphere, even with the poorly detailed stadiums.

Gameplay , altough not as perfect as in KCET games, is acceptable, at least when compared to the latest attempts by EA in their FIFA franchise. Funny enough, the major drawback is one of the trademarks of his baby brother, PES, passing. The automated aiming does not help (since it can change when you are about to make a pass), and while short passes end up frequently on interceptions (for both sides), through passing is rarely sucessfull, except when the receiving player is all alone and the ball path is clear of opposing players. Lob/long ball passing is, as in reality, a 1/3 chance of either finding your player, an opposing defender, or the ball bouncing and rolling in the grass until someones picks it up or eventually pass by the field limiting lines. Be also warned also that controls are sluggish, often responding only a couple of seconds after you pressed the button.

One of the most interesting features happens when, in crossing positions you face an opponent. By pressing a key, you can go to "close up" mode where you can trick the opponent and get a clear path to get the ball high in for your strikers, or even try to go 1-on-1 versus the goalkeeper. Altough the camera change and speed slowdown might seem distracting, it works pretty well, but simply isn't enough of a feature to let the game live just by it.

As for refereeing, reminds me of FIFA 98 for the SEGA Genesis/MD, where all fouls result on a yellow card. Well, maybe not all, but about 50% of those made by the computer, and 90% made by the player. To make things a little more frustrating in this subject, the computer often uses pushes and elbows the opponents to get you out of track, and even worse, most times it isn't even awarded a foul. Also frustrating, is the ammount of balls hitting the irons: you think you nailed a perfect shot, the ball passing by the keeper... just to be returned by the goal post with a loud bang, often in the inner part, meaning it will pass in front of the lone goal, and let you twice as frustrated. And some goals, scored in close and point blank ranges, only go in after hitting the far post, and running along the goal line for a while, so you better like the ball hitting the post sounds, they will be constant. Other than this issue, the game is realistic enough when it comes to scoring: Outside the area, tap ins, crosses, freekicks, corners (here, the ball placing is done by classic arrow), chipping over the goalie... the real deal, no more, no less.

Defending, you already know you must avoid doing fouls by all means, and the passing is bugged enough, so I believe you know the best way to defend: keep a constant pressure, closing the passing lines, and eventually there will be a bad pass coming to your feet. If you really need, or want to defy the rules, there are four kinds of interfere with opposing players: run close to him, you'll go shoulder to shoulder. If you are faster, you can try to run him over, but if you are being outrunned want to slow him down, you can push his shirt, and if you abuse, he'll fall down, and there goes a foul. Then, it's the usual foot out and the sliding tackle.

However, nothing is as important as tactics. And in ISS 3 there is plenty to adjust. Select a tactic and finetune the positions of the players, give defenders instructions to stay back or help in attack or attackers the other way, adjust marking (zonal or man to man) and the strategy. It's important to discover weak points on the opponent tactics in order to exploit them: a missing or less challenging wing of defence, a slower defensive midfielder or a carded player.

Lastly, for a final conclusion, ISS 3 is the typical two blade sword. While it has some really bad features (graphics, a few parts in gameplay and bloated requirements), others (presentation, tactics, player ratings and abilities system) manage to keep the game afloat. Altough I do not recommend ISS 3, I rather suggest it for football PC gamers tired of waiting for something new to play, except those who already played the PES series on the PSX/PS2. An average title that could have gone a bit further if the porting team made some real effort to improve the game for the PC version. For ratings, it's a tricky one to do. In the first hour, it goes as a top game, after an afternoon playing, it goes down to 8, and after a few days, it goes to 6's, where it stays, much possibly forever. 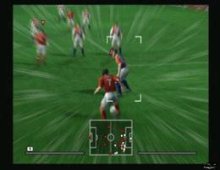