Kick Off '97 is a disappointing entry in Anco's solid Kick Off line - a good example of how bad a game can get without a good designer at the helm (in this case: Dino Dini, the creator of the first few Kick Off titles). Football games expert Greg Booker at Games Domain explains why you should stay away from this old game:

" After the obligatory but uninspired intro sequence you're presented with a polished looking front end, bearing some resemblance to the Actua Soccer series, with a player doing various actions with a ball. The option to customise the team and player names, appearances and kits and save them to disk is provided, along with the usual spread of competition options, friendly exhibition games and a practice mode. There are four camera views, including a top-down angle which is very reminiscent of the first two Kick Off games, and the game is actually relatively playable from that angle. The controls consist of the usual four directions and two buttons which perform different actions dependent on the context. All the usual headers, overhead kicks, shots and passes are available and the action is fast-paced.

The gameplay feels quite fluid but defending is tricky as once the opposition gets a breakaway one wrong turn and you're left trailing in their wake. The control system works quite well, but it doesn't hang together as well as, say, the PSX version of Olympic Soccer... The fast pace of the action makes it difficult to pass defenders by twisting and turning and is in that way somewhat reminiscent of it's pinball-like ancestors.

At this point, we come to Kick Off 97's artificial intelligence, or rather lack thereof. Particularly awful is the way in which I can only assume the lesser teams have been handicapped - for example, Faroe Islands versus Brazil.... Faroe striker approaches the penalty area, he draws the keeper out, he goes round him, he dribble the ball towards the goal, then towards the far post and then past it and over the goal line for a goal kick!!! Then later in the game, a Faroe midfielder has the ball, unharassed by any Brazilians, just inside his own half, so what does he do? He passes the ball back to someone just inside his own penalty area who in turn passes it back to his goalkeeper, who promptly misses the ball completely and an own goal is scored!!! Then there's the bug where, 1966 World Cup final style, there is a disputed goal, except in this case the ball does cross the line but the keeper pulls it back across and no goal is given!! I could be generous and say that it's a deliberate simulation of the linesmen being unsighted but somehow in view of the other problems, I doubt it.

Well, sadly, I can find little to recommend Kick Off '97, as far as I can see, it's a game living off the reputation of it's predecessors and is in need of a major revamp - perhaps Anco and Maxis could persuade Dini to get back together with Screech to produce the next version, maybe then we'd get a game befitting the name." 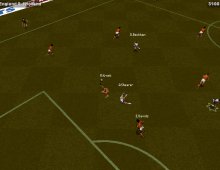