VR Soccer '96 is a good first entry in Gremlin/Interplay's short-lived "VR Sport" series, launched in 1996 to challenge EA Sports in the lucrative market of sport simulations. The game boasts a plethora of options and features, such as: "Virtual Fieldvision" viewing system (which is just a fancy way of saying multiple camera views in my opinion), motion-captured players that move realistically (but not as convincingly as Actua Soccer), 44 international teams with full editing capabilities, eight different skill factors per player, custom cups, leagues, and tournaments, replays from infinite virtual camera angles, multiplayer modes, and more.

The game's strongest point is definitely the graphics. The rendered players look realistic, especially in the high detail modes. Camera panning and zoom are smooth, and you can watch the action from an unprecedented number of camera angles including a skycam, from the player's point-of-view, referee's point-of-view, wire, or with momentum. VR Soccer '96 can accommodate up to two joysticks/joypads for hotseat competition, and the network mode can accommodate up to 20 players via TCP/IP.

The options menu is very detailed, allowing you to customize everything from player statistics, crowd volume, and toggling on or off the cool "video wall" (giant screen in the stadium that shows instan replays). The game also introduces nice touches in the interface: the 'halo' at the feet of the player you currently control flashes if the player is in range to shoot on goal - a very helpful feature.

Unfortunately VR Soccer '96 fails where it matters most in a football game: intelligence of computer opponent. Purists will scoff at the ease with which you can score goals in this game (beating the computer by 10 goals or more isn't uncommon), since the computer - especially its goalie - is far too stupid to pose a threat. So in the final analysis, this is a good-looking game that comes close, but doesn't get it quite right. If you are new to football games or don't mind the lack of challenge, check out this old game. Otherwise, there are more superior games on the market including the FIFA series and our HOBF inductee SEGA Worldwide Soccer. 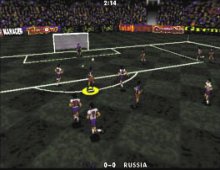