Tracksuit Manager 2 is a decent soccer management game (SMG) from Alternative Software. While the prequel Tracksuit Manager was one of the best SMGs at the time of its release, this sequel unfortunately offers too little, too late. In a field now crowded with the likes of Championship Manager and Premier Manager by 1996, Tracksuit Manager 2 looks too out of date and primitive by comparison. You can take control of any English team to compete in the British League and Cup competitions as well as all major European Cup competitions, but there is nothing here that isn't done better in Championship Manager. Like that classic, you can use scouts and youth scouts to comb the leagues for future superstars, use the transfer list, or even fine players for misconduct or poor performance. In a nice departure for SMGs, Tracksuit Manager 2 also allows you to compete against a friend in turn-based hotseat mode to see who is the better manager. But when all is said and done, Tracksuit Manager 2 looks too amateurish and shallow compared to top SMGs of the same period. No wonder we never see the third entry in this marginally underrated series. 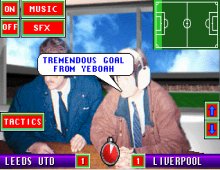