Club Football: The Manager is a decent simulation of England's soccer league. As manager of a Division 2 team (which you can select at the beginning), your job is to lead the team to Division 1 and finally to win the Premier Cup. The game is reminiscent of Match Day Manager, down to the screen layout and player names. The gameplay is decent, although luck seems to play a big part in the game, and there is nothing here to elevate it to the standards of Premier Manager or Championship Manager, leaders in the genre. Well worth a look, but only if you collect this type of game. 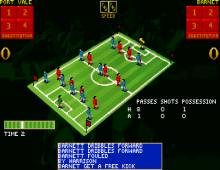