One of the best (if not THE best) shareware soccer simulations ever made, Football Fanatic rivals the venerable Championship Manager in the sheer number of options in the game, if not in snazzy graphics. Choose a European team to lead in regular leagues and various club championships. Almost every facet imaginable is under your control, from in-game tactics for the individual players down to additions to the stadium you can buy. Best of all, the game was released into the public domain in 1998, although sadly the official site is no longer maintained, and Thunderbear's website no longer mentions the game. If you are a fan of soccer simulations, Football Fanatic is simply a must-have. 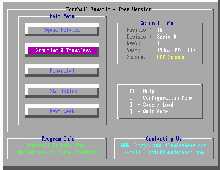