Definitely one of the most famous Spectrum games ever made, Football Manager is arguably the game that single-handedly invented the whole SMG genre -- soccer simulation games that simulate focus on the managerial aspects of the sport. A huge success for Addictive Games, it was eventually released on over ten formats, and sold in excess of half a million copies. PC gamers didn't really know or care much about the game, however, mostly because the PC at the time was far from being as popular as, say, the Commodore computer.

This brilliant 2001 remake by Paul Robson manages to be very faithful to the original -- down to the little stick figures that represent the action. The options and graphics are so simplistic in comparison to today's SMGs that it is a little surprising that the game held Spectrum gamers' attention for so long. But as always, it's the gameplay that counts, and despite the simplicity, Football Manager has a lot of that "just one more turn" quality that eludes many modern games.

Among the many features of the game -- all innovative at the time -- include: a transfer market (with ridiculous prices!), full league tables, injury problems, FA Cup, management rating, four divisions, team selection and seven skill levels.

Most of the game was bland menus and statistics with some horrible choices of colors, but it doesn't matter because at its core, Football Manager is a wholly engrossing experience.The goal sequences are the stuff of legends Spectrum gamers will be happy to recall: small matchstick players kicking a square ball into a goal the size of the Titanic - then followed by the goal tune. The computer AI in Football Manager is largely nonexistent: you can often win matches with 9 players or even less, and unlike SMGs today, the game is essentially all luck and not very much skill. But given its age, that is hardly surprising. Die-hard SMG fans who crave realistic outcome or complex strategies and those who didn't grow up with 8-bit computers will probably find Football Manager very primitive and uninteresting. But for the rest of us, this excellent fanmade remake is a great way to reminisce about the good old days of gaming -- with a truly classic game that launched a new genre. 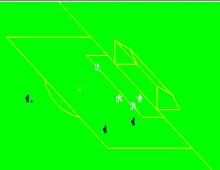