Total Knockout Boxing is an ambitious boxing game that uses the same cartoon style as the classic SNES game Super Punch-Out!, but falls flat on its face due to awkward controls, ridiculously easy gameplay, and blocky graphics that are as unrealistic as 4D Boxing is realistic. The official blurb: "...fight opponents from around the world in your rise to the top of the female boxing world. This 3D boxing game lets you assume the role of an up-and-coming young boxer, looking to mark her mark in the ring. Execute high or low punches, block, or perform special moves that cause extra damage. Bob and weave your way through a challenging lineup of female fighters to earn the title you deserve."

The unusual cartoon/claymation approach to modelling could have made Total Knockout a unique and compelling game, but unfortunately the graphics are overshadowed by very awkward and unresponsive keyboard controls and ridiculously easy opponents. It's not as bad as Catfight (another all-female boxing game and one of the worst of its kind ever made), but there is no reason to try a sub-par game when there are classics like 4D Boxing around. Only worth a look as a graphically unusual game that could have breathed fresh air to the genre. 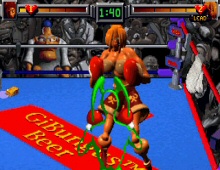