Tennis Antics is a great tennis-like game developed by Pure Entertainment and distributed free of charge on the company's Freeloader.com website. Losely based on tennis, Tennis Antics is more about collecting arcade-style power ups and using them to your advantage to deplete your opponent's energy. The only similarity between the game and real tennis is the only rule in the game: you must not allow the ball to bounce more than once on your side of the court, lest your energy will be depleted. The overall goal of the game is not to score points, but to hurt your opponent by making less mistakes than him or her. Your opponent loses health when failing to return the ball to your side after the first bounce.

The game offers over 20 different characters to choose from. These are fantasy players including Ghost, Pirate, and Zombie - each with his/her own attack style. You will play the game on 3 different fantasy courts, each with different effects on the game and unique power-ups. These power-ups range from attack items such as Fireball and Plasma (which turns your ball into a ball of plasma), to enhancing items such as Strength (allows you to hit the ball harder) and Pause (immediately stop the ball). You can even play the game in Story Mode, which allows you to unlock all the characters and courts, practice in Exhibition mode, or against a friend in 2-player hotseat mode. Whether or not you enjoy wacky sports games (the best examples of which are numerous dodgeball games from Japan) or tennis, you'll have a lot of fun with this quirky old game. Highly recommended. 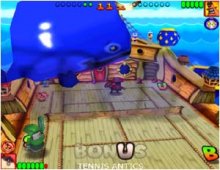