Wild Board Games is a fun collection of board games for Windows, the fifth in Corel's line of 'edutainment' CD-ROMs for children before the company refocused its efforts on graphical applications in late 1990s. The program includes five board games adapted to the computer: Chess, Checkers, Reversi, Snakes & Ladders, and a Switch Puzzle. Each of the games features attractive cartoon graphics, an intuitive interface, and multiple difficulty levels and help functions. As a bonus for children, Wild Board Games also incorporates a handful of animated characters and some additional functions such as a paint editor, a Space Invaders-like video game, a dressmaker activity, a cake-maker activity, a Tic-Tac-Toe board, and a video viewer. All in all, a great package that will appeal to both your kids and you - if you are a fan of traditional board games. Highly recommended! 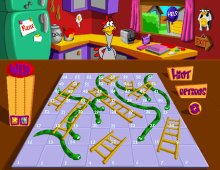