Trivial Pursuit on the computer... always a tricky thing. The game lets you reveal the answer to the questions and asks if you made it correct. Basically completely nonsense to play alone and when playing with a friend the question remains why you don't play the "real" board game. I've always wondered who buys these games at all - but then again, obviously not too many as the game is out of sale (and I cannot remember having really seen it in the stores at all, might just be me, but I guess it wasn't exactly a bestseller and thus not many copies were in the shops). If you don't happen to own the board game this game makes for a somewhat decent replacement though. That weird turkeylike... person... asking the questions is a bit annoying - also he managed to annoy me very fast by endlessly demonstrating that the programmer was able to put my name into a variable and insert that into each and every statement after the question, success or not.

Anyway - apart from that the game is not bad and also offers things a board game cannot, like showing pictures (e.g. to recognize an island by its shape) or playing tunes (e.g. to guess a film it's from). If for some reason you prefer to sit at the computer with a few friends more than sitting around a table this is your game. But seriously - otherwise I recommend the board game, it got more potential for a good playing session with friends.

Deluxe Trivial Pursuit is a solid follow-up to Virgin's earlier Trivial Pursuit, released a year earlier in 1991. The game improves upon the original in every way imaginable: better graphics, more categories, more questions, and just about everything else. The interface is intuitive, although the addition of cartoon characters who ask questions is a bit redundant (the game shifts to a view of a room when you select a category). With thousands of questions and fun gameplay that is very faithful to the boardgame, Deluxe Trivial Pursuit is the best computer version of the family favorite until Hasbro released the multimedia version almost a decade later. A must-have for every trivia fan's collection - highly recommended! 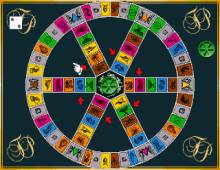