Monopoly used to be my favorite board game ages ago. I still consider it to be one of the most addictive and very intelligent game, but I am too lazy to set up the board, distribute money and most of all - to gather enough players to make the game more interesting. If you are like me and you like Monopoly then this is the game for you!

The classical board game is back. Virgin games did a good work with this one. The rules are the same as in the original game so that will not be a problem for you. Select number of players (1-8). If you are alone you can compete with computer-controlled opponents but it is much better to play with friends. Anyway, try to become the one and only millionaire by making your opponents go bankrupt. Great family game that you will be getting back to many times...

Until Westwood's Monopoly CD-ROM, this was the best PC conversion of parlor game classic. All the tokens are here, with up to 8 components, any number of which can be computer-controlled. The rules of Monopoly are included in full, thanks to Windows help file. As far as board games go, you can't really find fault with this Windows version of the classic.

"Trade Up! The Game You Grew Up With Has Grown Up Too!". That's how Monopoly Deluxe's description started on its back cover. The truth is that I actually grew up with this game, since it was made in 1992, the year I was born. I liked the game back then, and the spark is still alive nowadays. Now, on to the review!

Monopoly was and still is one of the best-selling commercial board games in the world and, having been played by over 750 million people since 1935, the year when Charles Darrow patented the game, can also be considered the most successful board game in the world. Later, Parker Brothers acquitted the rights from Darrow to produce the game in large scale. Monopoly Deluxe is a conversion of the classic board game, made by Virgin Games in 1992. Boring, eh? I know, I know. I don't like History much neither. The important question is whether or not Monopoly Deluxe has the addictiveness and charm of the original Monopoly? Read below and you shall see...

This game is based on the original version made by Parker Brothers, the Atlantic City version. The difference between this and the London version pretty much stands in the names of the places, so I won't go into details.

The first things which made me play the game when I was little were the graphics (that is besides the fact that everyone was talking about this game). They are rendered in 256 colors, and are pretty cute. The animations are also very good and detailed. You can even see how the animated player characters jump and hop along the game board. Each of them also makes a specific noise before starting to move (the dog barks, the horse trots...) which is a nice addition. Little details are abundant - for example the dice are rolled by the monopoly man who appears from the inside of the letter "o". However, if these little animations start getting on your nerves, you can skip them with either the left mouse button or by pressing escape.

As for the gameplay, there are lots of customizable options which enhance it. Whether you want to play just a quick game or even a long game with your friends or with the computer, everything is possible. You can modify the rules (if you want to revert back to the official rules, there's a button for that), the animations, the sounds, the board appearance and some more misc. options. You can play against the computer or against your friends in hot-seat mode. You can select who will start the game, and if you are playing against the computer, the difficulty - "calculator" means easy, "XT clone" medium and "386/33mhZ" hard. A nice feature is that if any of your friends leaves, you can make the computer replace him with a single click.

Now, let's talk about the A.I. It can move, buy properties, build houses and hotels on them if it acquires the right monopoly, make you pay a rent when you "land" on one of his buildings and trade with you..., but it can't participate in auctions. The only time when it pays is when the price drops at 1$. If the price is bigger than 1$, it won't pay in the auction. One thing I don't like is that the difficulty setting only changes the odds of the computer accepting a trade.

The second thing I don't like is the bank. When you play with your friends, one of you takes care of the bank, no? Well, in this game, the problem is that the computer cannot take care of the bank, and when you want to get a property that it owns, you can simply initiate a trade, and since you're the bank, you can get loans and properties for free.

Oh, and if you are wondering how to access the menu, all you have to do is right click anywhere on the screen and hold the mouse button down.

Overall, this is a game one can enjoy playing both with his friends and with the computer. 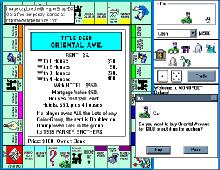