I think You all know what Risk is, don't You? If there is someone who doesn't, then let me give You some info about this game. The original Risk is a board game, a strategy board game. It is played on a map of the world, divided into many territories and continents. Each player gets a number of armies and one goal - conquer the rest of the world (or if You play the UK version - complete the given mission)! Risk is a great family name and should not be missed. If You don't have it - click the Download link and get it. It is a great thing to have when the friends come over.

This Mastertronic/Virgin version of Risk is an official conversion of the classic Parker Brothers board game. In contrast to many other "official" conversions that are poor replica of the board game originals, Risk is a competent conversion that features decent AI, many options, and intuitive user interface. As MobyGames explains it, the game offers ...two to six human and/or computer players attempt to conquer the world with their armies. Computer players have three different skill levels.

There are actually four major versions of the game available: UK full game, US full game, UK short game, and US short game. The short games have an added rule to make the game go faster. In the UK short game, players can try to complete an assigned mission to win. In the US short game, players try to occupy enemy HQs. In addition to rule differences between the UK and US game, there are different graphics used for the cards." Overall, fans of the board game should find this computer version of Risk an excellent substitute for the real thing. Perfect for those nights when you can't find enough people to play a game of global domination. Recommended!

Risk – a classic game of world domination (at least I believe that's what they said in the TV commercial for the original board game). Yes, it was originally a board game and this computer version is a faithful adaptation of the board game and a classic turn base strategy game that is definitely worth having.

The graphics are standard EGA (nothing breathtaking, but still quite nice). You control everything with a mouse, so the controls are really simple enough (only thing you can't click is the number of units – if you want to change it, you need to type it yourself). The game also features some weird beeps which should be the sound, but I suggest you turn those off and play some pompous music in the back (I played Carl Orff's Carmina Burana).

The best thing about this game is, that you can invite up to five friends to play with you, or you can play against the computer (it has three difficulty levels). Unfortunately you can't play the game via the modem, so you'll have to prepare some snacks if you plan to host this game.

So what do you have to do? Well it depends on what type of game you chose. You have the FULL game or SHORT game option (both US or UK). If you chose a full game you need to conquer the whole world and destroy all opponents. The short game on the other hand gives you a mission (like conquer some continents, capture 24 territories,…) and you win after you complete the mission. The difference between US and UK version of the game is of a different nature. Those who are familiar with the game already know that you have the RISK cards which you can trade for more units. You need either three cards of the same type (cavalry, artillery or infantry) or one of each category (you can also have a joker card). In the UK version you get a certain number of units for every set (infantry – 4, cavalry – 6, artillery – 8 and different cards – 10). The US version has a different system. Every time you change a set you get more units. So the more you change (doesn't matter what kind of a set), the more units you'll get. 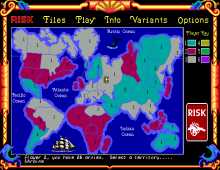