Iron Blitz Edition is THE proper computer version that does justice to the classic board wargame, released years after the disappointing (and very buggy) first release by MicroProse. Wargamer.com says it all about what makes this game a must-have for every wargamer:

"Finally, a computer game that captures the look, feel, tension and fun of the classic board game it is designed to emulate! Axis and Allies: Iron Blitz Edition is not merely a computer version of the classic Axis and Allies board game; it IS the game - and a lot more. Bill Levay and the rest of the design team at Hasbro's MicroProse division kept the "play" in player in mind when they put this project together. Their attention to detail, ease of operation and knowledge of the fine points that have made Axis and Allies a great board game are evident at every level of play.

The classic Axis and Allies (now version 1.33) is a very solid, easy to play computer version of the board game. The situation is early 1942. The world is at war. France has been conquered, Russia has been invaded and Pearl Harbor has been bombed. There are five countries in two alliances (the United States, United Kingdom and USSR are the Allies, and Germany and Japan are the Axis). Each country, in fixed order, will spend money on weapons research and new units. It will then move, fight and conduct post- battle moves. It will then place the new units it constructed at its factories, and will collect income. This process occurs in a steady, turn-based process until one of the victory conditions agreed upon at the start of the game have been met (either the conquest of two enemy capitals, or the attainment of a majority of the income-producing territories on the board).

Iron Blitz adds new units and some new rules to the original game, but it does not significantly change how the original, classic game is played. The computer players retain their same strengths and weakness (and strategies) from the original Axis and Allies board game. Where Iron Blitz really takes off, however, is with its seven new scenarios and its editor. These add new situations, new balances of forces, and new problems that will keep players going back to fight the computer (and other people) over and over again.

The Cold War scenario shows what can be done with the game editor. The rules booklet provides extensive information and ideas on how to change the ownership, colors and values of the map, how to import player-provided icons for units, and how to make new games by either tweaking the existing games and scenarios, or by creating a situation pretty much from scratch.

The simplest way to make a new game is to mix up the composition of the Axis and Allies teams. There can be a Nazi-British "Europe Against the World" team or a Japanese-American "Pacific Alliance" against the three European continental powers, or some mix thereof. This setup, or one of the classic/scenario games, can be modified by giving or taking away units or by upgrading or modifying some or all units of one or more countries. There are many rules that can be added or deleted as well (like the two-hits to sink a battleship rule, or Panama as a single zone for movement option, just to name a couple). The possibilities are pretty much endless ? however, this reviewer would suggest that the player take some time and work it all out on pen and paper (or with the real board game at his side) before opening this electronic toy box.

Whether alone or with a hot-seat friend, Axis and Allies: Iron Blitz Edition is everything the board game was, and a little more. Most importantly, however, it is still a great box of toys, albeit electronic ones." A must-have.

Remember when people played board games? They would sit around a table with the likes of Monopoly, Scrabble, and Risk. Or perhaps they would play more complex games like Diplomacy or Axis and Allies. Hmmm…that last one sounds familiar. Oh, that's right, this is a review of that new computer game Axis and Allies: Iron Blitz Edition. So I may be exaggerating the diminishing popularity of board games, but no one can deny that computers have decreased their appeal. But for the faithful, all of the old favorites are still available in stores. For those of us that would rather have their fun on a computer screen, or simply cannot find human opponents, Hasbro Interactive has begun a long line of board game conversions to computer format, and I appreciate it. You see, my friends would rather play a hot-seat game of Heroes of Might and Magic 3 than engage in World War II with little plastic pieces. So now all I have to do is pop in a Hasbro Interactive CD and play against the AI (more on this later) or find a human opponent online. We're so spoiled!

OK, enough small talk. You see, Axis and Allies is an excellent board game, and has a huge following to this day. Hasbro decided that they would bring the experience to the computer. The result was like bread before dinner. It will hold you, but you know there has to be more. All of the main components of its paper and plastic counterpart were relatively intact, save for some small bugs, but the main criticism was the AI. Basically, it was pretty damn stupid. It would make bonehead moves, and players balked as they were able to defeat it in just a few turns. A patch was issued, which fixed it a bit, but the best way to play was still online. So in comes the Iron Blitz edition, a new and improved version. Before I discuss some of the new features, let me just say that the AI is much better. Good players will probably be able to beat it every time, but it now plays more aggressively, reinforces weak territories, and with a couple of occasional exceptions, does not make overly stupid moves. I hate to have to rely on patches, but with one more touch up, I think the series can finally claim ownership to a challenging AI (getting there).

For those new to the game, you can check out our review of the original, so I am not going to go into too much detail. Basically, you choose to play as the USSR, Japan, United States, Britain, or Germany during the Second World War, or play as all of the Axis or Allies. Pearl Harbor has been bombed, the Germans and Soviets are fighting it out in the Soviet Union, and industries are pumping out massive weapons of war. The game gets carried out in a few steps. First, each country uses its industrial production certificates, increased by gaining new territory, to research more advanced weaponry and buy new units. Players then move pieces on the map with the intent of attacking. Battles are determined by the roll of the dice. Each unit has it own defense and attack values, which can increase or decrease depending on what it is up against. To score a kill, you just have to get lucky and roll a number equal to or less than the attack value. A nice option in combat is being able to allocate the hits. For instance, if the enemy score two hits, you can opt to have two infantry units wiped out rather than two aircraft. Not entirely realistic, but since when has war been determined with dice?

After all combat is resolved, players can move units to reinforce weakened territories, and place the units bought at the start of the turn. The catch is that they have to be placed in a territory with an industrial center, which are mighty expensive to buy, and can only support a limited number of units. Players have the option of changing quite a few of the game's rules, the most important being victory conditions. The choices range from complete world domination, to capturing two capitals, to obtaining a certain number of production certificates.

Whew! There is an overview of the gameplay. The Iron Blitz edition adds quite a few improvements. Besides the improved AI, unit graphics are no longer the generic tanks, submarines, planes, and infantry. Now each country has their own unit graphics, so German tanks look like German tanks, and American bombers are different than British bombers. Nothing new in terms of gameplay, but does wonders for the atmosphere. Even better is the inclusion of a graphics editor, so now players can create their own unique unit sprites. I would love to see someone create a set of extraterrestrial units for some all-out War of the Worlds type of game. Sound effects and music are good, but unchanged. Even though each country has a unique track, however, music does get repetitive.

There are two new units to wage war with, the marines and a new destroyer. The marines unit gets a bonus attack value of 3 when making amphibious assaults, and the destroyer adds some extra punch to the navy, especially because it is immune to a submarine's first strike bonus. Players will get plenty of opportunities to use these because of the addition of scenarios. Players can create their own with an editor, including the option to edit and rename territories, starting IPC's, and even country allegiances. The game comes with quite a few intriguing ones. These include a Cold War scenario, in which players can conquer the world as the Soviets or Americans. There are also a number of interesting "what if?" scenarios, in which certain countries stay neutral. These greatly extend the life of the game. 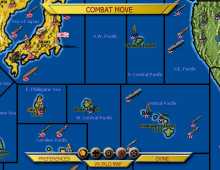