This is the Windows 3.1 version of Risk, first published by Virgin for PC in 1989 for DOS. Developed by Azeroth, this version is very faithful to the board game, except it has a disappointingly dumb computer AI which makes a game goes by far too quickly. As in the classic Parker Brothers board game, Risk lets two to six human and/or computer players contest to conquer the world with their armies.

Despite computer players having three different skill levels, they are easy to beat even on the hardest difficulty level. Also disappointing is the lack of diplomacy options - something that makes the board game so addictive. All in all, this 1991 version is not much improved over the DOS original - and far less fun than the excellent and newer Risk II. Recommended only for a few minutes of nostalgia.

Risk is a strategy game based off the 1959 Parker Brothers game. When you play, you take on the mantle of a general, and you are tasked with the noble goal of world domination. The game is designed to be played against five other opponents, with each general's armies being represented by a different color. In the beginning, your armies will be randomly spread throughout the forty-two countries and over the six continents. Each player will receive a certain amount of armies, depending on how many players are in the game.

At the end of every player's turn, that player receives one risk card, which contains the image of one of the forty-two countries. These cards can be turned in for additional armies, providing they either share the same army icon, or each has one different icon. The amount of the armies received is decided by how many cards that player has already turned in, the first turn in being, four, next will be six, then eight, ten, etc. The player also receives two armies for each country displayed on the cards that the player currently occupies. An additional army is received for every three counties that he controls, with a maximum of three armies received per turn. Additionally, more armies are rewarded if he controls an entire continent. Have more than one army in a country adjacent to the country that you are attacking does attacking an enemy player.

The number of dice equal to your attacking armies (not including the one left behind to guard your country) is rolled against the defender's total amount of defending armies, and casualties are removed based on the dice rolls, where the higher number wins, but a defender's six will always beat an attacker's dice roll of six. Over time, strategies will be formed, and each player will most likely end up preferring starting his siege from a specific continent. North America is a great staging ground, with easy access to South America. From here, Africa or Europe are both choice targets but beware of Asia and Australia however, because Australia is easily controlled, while Asia has attack points to almost every other continent, making it a powerful starting position as well. The game is considered over when only one general remains, and all his enemies have been defeated.

Risk is a classic game of strategy, tactics, and more often than not, simple luck. The game is considered one of the most popular board games, one of the most addicting, and probably one of the longest running games out there. 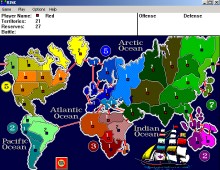