Not the best tennis game around, but still recommended if you like to play tennis games. The game does offer features not seen is most tennis game as you can choose between several game levels, create your own players and play on all the different courts like indoor, grass etc.

The control is rather difficult and you may need a program like Moslo to slow the game speed as the game can be very hard to control as the current speed. You can play in practice, single game, tournament or all-stars mode.

Center Court Tennis is an average tennis game that looks better than most tennis games at the time, but plays much worse than classics like Great Courts 2. All the options you could expect from a tennis game are here: create your own player, compete in a single match, tournament, or all-stars mode, choose court surface, and practice your shots in practice mode. On the court, though, the controls are very awkward, and the kinds of shots you can make are limited to simple strokes. It is no use trying spins here because they are not implemented, and even volley smashes are near impossible to pull off. Overall, CCT is a superficial tennis game that proves the adage "looks are only skin deep." There are far better tennis games out there. 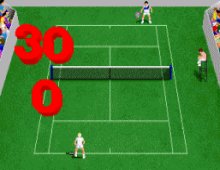