Released in 1989 by Blue Byte, Great Courts is one of the first really enjoyable tennis games on home computers. Sure, it doesn't have the VGA graphics and the great variety of options you'll find in Great Courts 2, but it's a very nice game on its own. Actually, a little harder than its successor, making it even more fun to hit that backhand down the line, passing your opponent near the net. I also prefer the fact that you always play at the bottom of the screen, as I found it much harder to play at the far end in its successor. Be sure to check out the manual below for details on game-controls. Though, compared to the original Amiga version of this game, the PC conversion looks pretty poor. Especially the EGA colour-palette makes it look a bit odd. Still, at the end of the day it's the gameplay that matters, and Great Courts delivers much more than other tennis games at the time. Highly recommended! 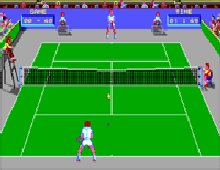