A decent conversion of the arcade game, Tag Team Wrestling, which itself was only an average game. Nothing really sets the game apart from other wrestling games, although it was one of the first. The controls are a bit awkward but workable, but the opponents are very repetitive (you can win the matches doing more or less the same moves). Graphics is very poor, and it's not because of CGA limitations -- other games such as Tau Ceti and Alley Cat are much less grainy.Your goal is to win enough matches (35 to be exact) to become the Super Champions of the World Wrestling Foundation. A nice feature is the energy bar, which can be depleted once you are pinned to the floor. Strangely though, it can be regained simply by pressing a button repeatedly. Your partner is also quite incompetent most of the time, so playing with a friend is much better. Overall, an average wrestling game that's nostalgic, but not much else. 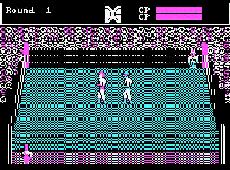 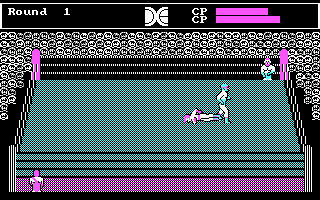