A fun wrestling game that doesn't take itself too seriously, Take Down Wrestling features a good sense of humor, a wide variety of moves, and good controls. Gameplay is very fast: pick a tag-team of two wrestlers, and off you go to a championship match where the winners will be crowned champions. There are many character-specific moves to try, although player animations are too blocky to see anything in detail. When a player is pinned down, and the referee counts to three, it's game over. Despite the lack of WWF endorsement, career mode, or any flashy graphics, Takedown Wrestling is a fun quick-and-dirty wrestling game perfect for anyone looking for a quick game with decent enemy AI-- and much better than OCEAN's abysmal WWF European Rampage. 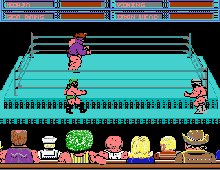