If you ever used Windows 3.1, you have probably come across Ski Free at some point. Ski Free deserves to be ranked alongside Minesweeper as one of the best "coffee break" games for Windows ever made. First released as public domain by Chris Pirih, the game quickly spread like wildfire throughout BBS's and by word of mouth. So it is no surprise that Microsoft bought the copyrights and sold it as part of Entertainment Pack for Windows compilation. [As a side note, it is a bit silly to find a game called Ski Free in a commercial pack - perhaps Microsoft should have changed the name to Ski Commercial? ;) ]

So what is Ski Free? Simply a no-frills, no-nod-to-realism skiing game where your goal is ski downhill as fast as possible to beat your own best times. Along the way, you must avoid rocks, other skiers, dogs, trees, and other obstacles that get in your way, while take advantage of ramps that send you leaping into the air. The game is easy to learn: use the keypad or mouse to steer your skier - that's all the controls you need to know. Fast, fun, and addictive - what more do you want from a game? ;) There are worse ways to spend 5-10 minutes of your life than playing this "cult classic" old game. Highly recommended!

Being one of the most simple games I have ever seen, doesn't mean that it's a bad game. And this game proves it... It's simple, you ski down a hill and you search for a game's start point. When you get there, just follow the red and blue flags and you'll get there. There are many obstacles in your way and you can be eaten by a very simple drawn "giant snowman", which made me rolling on the ground of laughing, really. It's simple, it's easy, but I can also tell you that this one is a must have. Just to play one time and never see again, it's great!

And hey, we're still talking about the "wingames" series on this site, so don't expect too much of any game. 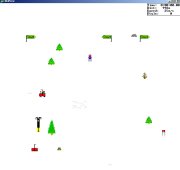