Tactical Manager 2 is a solid soccer management game that was recently made freeware by its developer. Daniel Henriksen nicely sums up the pros and cons of this old game in his review:

"...Although this game is not straightforward, it fairly quickly caught my attention and once I got the hang of how the game works (or maybe it's more how to use it), I actually enjoy playing the game. I tend to play it for smaller periods at a time, though, but this is mainly because the Training sessions in the game are a big hurdle and this is one aspect of the game, which the programmers ought to concentrate on. You cannot just create a specific training schedule, - focusing on shooting for the attackers for instance. You have to 'open' each player (and you cannot just double-click, grrrr =) You have to 1) select him 2) click select and 3) click a couple of times more to do his training ... and this with each player in your squad) and choose what he should be training this time. Takes a lot of time and if you're like me, it ends being funny halfway through your squad ... so you (I) blindly select the players weaker spots and training them; too bad in a game like this. Also, when you train your players, you get instant results - if the player is injured during training you'll know it right away, - and also if he strengthens or weakens. Hmmm, normally a player would develop over time and not right away like this (during a training session 4 of my (best) players were injured in a row. Damn!), but this is of course great if you run fantasy-leagues and you need to do training right now and such, well: I guess it is. But I can live with this, if I have to. It seems like the game from the beginning was developed mainly to calculate data for online-tournaments, and later the programmers decided to change it to be playable on a one-man basis.

The game-sequence is not overwhelming, but quite amusing nevertheless - amusing in the same way, that I remember Giant Killers - Euro Manager to be. You cannot select how long time the match should last, but you can enable/disable the commentary to speed it up. It catches my attention and I think it's okay as it is. My advice to the developers would be to work on the photos and perhaps do a kind of Quick Bar for the beginners (ok, ok, the really dumb ones like me) and work on the player detail screen. It would be nice to have a bigger box, which more info in it instead of having 12 categories. I think the About/Skills/Photo/Roles/Stats to be fitted on one screen - and you could decide his Role without having to cycle 'round 12 screens. The Training/Physiotherapist window could be better ... perhaps letting the user select all the training/the two physiotherapist visits and then press a Go-button or alike and it all would be calculated then. Again you would not have to click so many times to get the job done and a message could let you review the changes. I had an injured player that miraculously cured because he went to the Physiotherapist twice the same week (!) Also I began a game with Kettering Town and because my Goalkeeper got injured in the very first training session, I was suddenly without a goalie. I then tried to buy one without a contract, because I hadn't the finances to get a club to release one. The Goalkeeper I found was out of contract, but when everything was in place, the club wouldn't sell their only keeper (I don't care if it their only keeper! =) ... and besides I can't buy new players, because I do not have the finances (but I do!) =( ... the game changes the system colours before loading, - changes it back when you quit, though, but disturbing and unnecessary and I don't like the buttons, that don't have any effect when you click them.

This review went the wrong way ... I began with the idea of praising the game (it is funny), but I have been focusing much more on it's small, yet significant, errors, than I had planned; It sounds much worse than it actually is. Remember this game is free (and not a huge download, so go ahead and download it - or even better buy the CD to get it all (I believe it also includes commentary, all the badges and kits and whatever additional stuff there might be) and support the minimum of developers that let us download free software.

A final conclusion: A nice game whose strength lies in it's editable data files and size (1050+ teams, 32000+ players, 21 cup tournaments, +30 different leagues (both worldwide)) and a great game for simulating online-tournaments and fun to play over short periods of time. However, if the developers fix some of the things I've written about in this review, I'm a sure buyer ... or downloader." 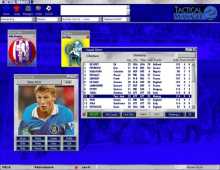