Domark's second try in converting Atari's arcade racing hit after Hard Drivin' from 1989. As far as I know, there was no Hard Drivin' II in the arcades, so this one has seen its light only on computers. Actually, it is identical to Hard Drivin', with a couple of added options that are computer-only such as a track editor, support for serial-linking two computers for two-player challenges and four new tracks. Sure, that's all quite nice, but the actual game engine stayed exactly the same. Not a single improvement in those two years. Well... but then, after all the first part wasn't that bad and now you don't have to pay for it here anyway. 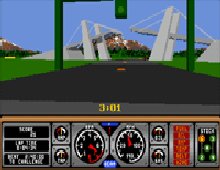