Hard Drivin' is a good PC conversion of Atari's arcade racing smash-hit. The arcade game was revolutionary in realism and feeling. Of course, the computer versions were never able to capture anything from it. But they tried. The game features one track, or actually it are two-in-one which you can choose by taking a bend or not at the start of a lap. The easier part is called "Speed Track", fairly straight-forward aiming for speed, and the more tricky one is called "Stunt Track" filled with a looping, a bridge jump and a bank bend. The in-game graphics are rastered polygons giving the game a more simulation-like feel. It's best controlled with the mouse and works quite well that way.

Overall your aim is simple: mastering the course as best as you can... and beating a set time to challenge computer opponents. Only one car to drive, there's only one course, doesn't sound like much. But it is quite enjoyable and a decent try in bringing the arcade game to your home. In 1991, Domark released Hard Drivin' II, which added a couple more tracks and a track editor. The sequel used exactly the same game engine as seen in this one... quite sad for a full-price game that was released two years later. 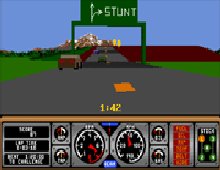