I'll start out by saying that cliché line, don't let the graphics fool you. This is a very good arcade racer with great controls, average sound but horrible graphics. To help you get a better understanding of each, allow me to examine each. First, the graphics do what they need to do, and that is that. The menu screens are okay, nothing to write home about. The racing graphics are awful. Aside from the car, they are comprised of three colors. Black forms the lines that tell what is part of the track and what isn't. The blue is the sky, and there are different colors that make up the track and ground (only one at a time I must add). Anyway, graphics aren't the only thing that makes or breaks a game. The sound is good, considering it is out of the PC beeper. The only sounds though, are for the engines and collisions. The engine sound is probably as good as an engine sound you would get from the beeper. And one more thing, there isn't any music. The controls are good too. Space is gas, left and right is left and right, and down is the brake. Pretty simple stuff. The response is immediate, and on some really fast computers, it may be uncontrollable, so Mo'Slo is recommended. Finally the gameplay. There isn't a lot of depth, this is an arcade racer after all, but what's there was enough for me. The single player mode is a 4 level championship. Each race you and one computer driver duke it out to the end. The multiplayer mode isn't split screen or network, it's essentially the same thing as single player, but a second human is in the league.

Stunt Car Racer is a really wild racing game. Well it's not that much racing as you don't really encounter other cars except the only computer car you are racing against. But you aren't starting on the same place on the track. You can make the most incredible stunts like when you drive away from the ramp and smash your car to the ground, or when you are just about to drop from the ramp and instead smashes into a wall.

There is also a nice small turbo included with the car and some small nice flames pops up every time you use it. Overall a good game, but the game miss some real competition though.

Oh hey, wow - yeah! I still remember that game! This is hardcore racing - not just those ordinary Formula 1 tracks - how boring! No! You race over deadly tracks reminding more of a rollercoaster than a racing track. The gameplay is pretty good and with the league mode you got fun for quite some time. Considering the time the graphics of this game were pretty good - okay, the other cars look... stupid... anyway - the graphics around the game are nice and the racing went smooth even on "normal" machines back then (if you can dig out anything before a 486 these days you can consider yourself lucky - and THOSE did not even exist back then... 286 was high tech in 1990 ;) ). Also the controls are good - the car reacts promptly, but never seems to overreact on joystick-movement. Be sure not to forget to give yourself that extra boost by pressing the button - you can't win without it, but sometimes it can be a good idea to take that turn without it - leaving the track will let you lose time you don't have and make it pretty much impossible to win.

I really enjoyed this one - just as I did back in the old days. :) Unusual racing sim, good thing!

Before Geoff Crammond designed the much-underrated World Circuit for MicroProse, he designed this outstanding and unique stunt car simulation that features excellent physical model, 3D wireframe graphics, and addictive gameplay. Start off as a rookie stunt car driver in Division 4 and work your way up the ladder by winning races. The game's very difficult gameplay --you must stay on a narrow track going at speeds over 110 mph most of the time while avoiding other cars-- is eased by excellent practice mode that's available for every track. Highly recommended for its near-perfect balance of realism and sheer fun, both in solo and multiplayer modes.

The flames bursting out of the gigantic mufflers in front of you make you forget there's only three colors on your screen. As soon as your car hits the ground you feel the urge to step on the gas and make that one-polygon opponent eat your dust. 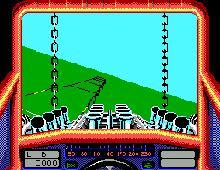 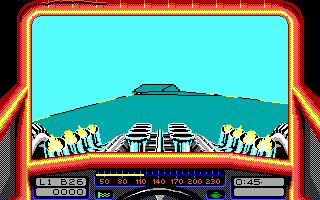