It might be because I do not like the idea of driving around in circles but I do not like this game. It is done pretty well. It runs smooth, is very hard but it's plain boring. There might be some Indy racing fans out there that might like it but I always preferred and I always will prefer Formula 1 racing.

Considered the age of this game it's actually quite good. You can choose almost all the things you can in today's formula one and indycar racing games. The view is also the same all though you can't change it like in many newer racing games. You can either practive on any of the tracks, run a whole race or start a campaign where you race on all the available tracks.

The graphics are quite especially considered that the game is from 1989 as most games from this period didn't have that great graphics. The sound can be a bit annoying as the only sound you can hear is from the PC speaker and when you drive it's very annoying to hear that sound (I guess you can imagine that sound right?). Overall a good old racing game.

Drive the legendary Indy500 - either 10, 30, 60 or the complete 200 laps of the race. A pretty wellmade racing-game. Lots of things to adjust, while still providing a realistic feeling. The car is not that easy to drive - give it a push too much and it will break out and crash into a wall or another car. But once you get used to it it's a fine thing. I have to admit that I got most of the fun out of crashing my car into other cars and watch the replay of it - nice feature, you can even choose out of 5 different points of view. The graphics of this game are surely not up to par, but they have been really good at the time it came out - still enough for the game to be one of the better games of this genre.

Indianapolis 500 is the first racing game by Papyrus Design Group, designers of modern-day classics like NASCAR Racing and IndyCar Racing. It's basically an excellent 3D simulation of the 25-mile Indianapolis 500. Not a simple arcade racer, where fast reactions are enough to lead to success, but a - for its time - very detailed simulation with great graphics, nice music and sounds by Rob Hubbard and many aspects of the racing-car open for modification. A great classic. Sadly, the game features only the Indy 500 track with no possibility to edit or add new ones. Here is some more information from MobyGames:

"Indy 500's graphics are simply stunning considering the system requirements. You cannot find a PC that won't run this game well. The sound is also quite good; if you have an Adlib or Sound Blaster, the engine sounds are amazingly realistic. That's not to say Indy 500 is an arcade game--when it says "simulation", it means it. You can adjust your spoiler, outer and inner tire pressure, and even the amount of fuel you have in your tank to shave precious seconds off of your lap. Also, the physics are true to life: If you enter a corner too fast, centrifugal force pushes you to the outside of the track, tires squealing." This classic is a forerunner to Papyrus' immensely successful racing series that continues to this day with NASCAR 4 and beyond. 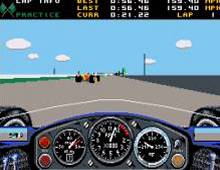