Until its spiritual successor Jane's F-15 (also designed by Andy Hollis) years later, F-15SEIII was THE definitive F-15 simulator, boasting excellent map authenticity-- every major landmark are included, including Defense Ministry and Presidential Palace in downtown Baghdad, major bridges over the Euphrates river, Seoul and Pyongyang on the Korea map, and the Canal Zone in Panama. You can use the radar to retrieve accurate pictures of what is going on, request updates from AWAC, and unleash the full arsenal of modern weapons on your targets. F-15SEIII has amazing graphics for its day, co-operative multiplayer (in the same plane), and excellent realism. In short, a must-have for all fans of modern flight sims.

Micropose released in 93 one of the most advanced combat flight simulator on PC. After the success of the first two F-15 Strike Eagle, the final episode was up to its predecessors.

Armed with a M61 Vulcan canon, guided missile and laser guided bombs, you will have to succeed in 3 campaigns : Iraq, Korea and Panama. Theses campaigns include several missions, each mission has a primary goal and a secondary optional goal.

F-15 Strike Eagle 3 had awesome graphics when it was released, the F-15 is very detailed and realistic. A CD version was released later, including a new campaign based on the Gulf War events. 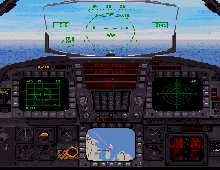