This is a Falcon flight sim from the same people who brought Hind and Apache Longbow into the world. The graphics engine from Hind was souped-up, and a later patch brought 3DFX support (which is much easier to program than Direct 3D, in my humble opinion). The graphics are not bad at all, but are nowhere as good as the contemporary F-22 Lightning from Novalogic. Then again, Novalogic's Lightning was an arcade game disguised as a sim, while DI's game was fairly realistic.

The missions are varied, but there is no dynamic campaign here, and there is no mission planner either. This somewhat limited the appeal this game exerted on me, which was only restored with the weapons modelling. Launching laser guided bombs is very realistic and very, very difficult (if you pass over the target, you will lose the laser lock). 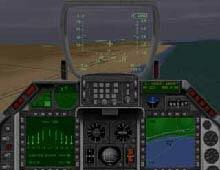