F/A-18 Korea is an ultra-realistic flight simulation that deserves much more notice than it received. The comprehensive review at GameSpot says it all about this game that rivals Falcon 3.0 in breadth and depth:

"As you've no doubt surmised, F/A-18 Korea is an exacting portrayal of the twin-engine F/A-18C/D Hornet dual-purpose fighter and strike aircraft, which, as it happens, is the most versatile multimission-capable aircraft currently in service with the US Navy. Every facet of the carrier-launched aircraft has been painstakingly modeled - from the highly detailed instrumentation clusters and sensors to the supersophisticated weapons and delivery systems - and gleaned from an assembly of declassified sources and from combat pilots who have logged thousands of hours flying the actual aircraft. In fact, a former US Marine F/A-18 pilot is credited with having written the exhaustive documentation included in the game.

There, I've said it. Although I've just gone on record and categorically stated that F/A-18 Korea is a "game," that's a bit of a misnomer of sorts. F/A-18 is, in actuality, an air combat simulation of the highest magnitude, similar in scope to the type of near-realistic virtual combat simulators the Department of Defense routinely uses to train and test its fledgling pilots. In fact, once you probe beneath F/A-18's gorgeous, all-new 3D-accelerated veneer, you'll find the heart of a lion, encased in an incredibly detailed yet eminently credible environment authentically replicated right down to the Fresnel lens and arresting wires. To the uninitiated, the bewildering array of information, pre- and in-flight mission-management charges, and near-infinite number of keystroke combinations could easily become overwhelming, frightening off all but the most dedicated players. Fortunately, newbies and veterans alike can learn the ins and outs of naval aviation from the pros, thanks to the inclusion of a robust, fully narrated, digitally enhanced set of tutorials. These interactive training tapes discuss everything - in exquisitely detailed fashion - from obtaining clearance for taxi and departure (on land and at sea) to recovering carrier-launched aircraft and interpreting the many digital displays. You can then take to the skies over the Hawaiian Islands on mock runs, honing your skills while putting the responsive, system-redundant F/A -18 through its virtual paces.

Although F/A-18 is set in modern-day Korea, no serious attempt has been made to create an artificial conflagration in the region, postulating a hypothetical long-term campaign between the ever belligerent North Koreans and the UN forces stationed south of the DMZ. As a result, the set of stand-alone missions portrayed in the simulation are somewhat disjointed, merely serving to illustrate the combat capabilities of the F/A-18 aircraft and its direct role in the overall scheme of battle should a conflict ever erupt. Finally, you can put your flying acumen to the ultimate test of endurance, squaring off over a network against up to three other human players over the parched desert floor near Fallon, Nevada.

Compared to F/A-18 Hornet 3.0, F/A-18 Korea features vastly updated 3D-enhanced visuals while maintaining good frame rates even while running on a typical midrange machine equipped with a 3Dfx Voodoo or Voodoo Rush-based 3D accelerator card. A mad frenzy of atmospheric effects is stunningly depicted including haze, lens flares, sun glare, and cloud layers, which are set off against a near photo-realistic rolling countryside illuminated by eerie dynamic lighting. A full-featured mission editor has also been designed expressly for F/A-18 Korea, which you can customize to create your own combat missions. About the only thing missing from the game is a foldout keyboard reference card, an unfortunate omission especially when you consider what it takes just to get this ferocious war bird airborne.

Make no mistake, F/A-18 Korea is a daunting air combat simulation, requiring vast amounts of time, patience, and hands-on experience to be completely understood and fully appreciated. Despite its somewhat tardy start, Graphic Simulations Corporation has, nevertheless, managed to catch up with the rest of the field in one ingenious catapult launch, unleashing an awe-inspiring simulation that ably and accurately models one of the most lethal yet versatile airborne weapons platforms ever to be conceived. F/A-18 Korea not only teaches you how to handle the US Navy's vaunted F/A-18 Hornet under the most demanding operational conditions, but makes a convincing argument regarding the resolve and commitment of one of the most underrated gaming houses around." 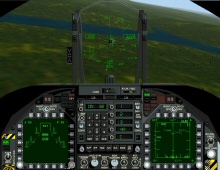