Longbow 2 is a new and improved sequel to EA's bestselling AH-64D Longbow, one of Jane's best releases. The game's graphics engine is now 3D accelerated, and an amazing dynamic campaign engine was added to give you virtually unlimited number of missions. Games Domain says it all in their glowing review about why every flight sim fan should own this game:

"In the new game, the A model Apache with its host of mechanical instruments has gone but to replace it, we have two versions of the Longbow, one with the microwave radar, one without. Also available is the Bell Kiowa Warrior, a military version of the Jetranger used mostly for recon and fitted with a mast mounted sight for peeping from behind the scenery and the Sikorsky Blackhawk, a utility helicopter used for supply and inserting troops. These fine craft lack a few of the comforts the Longbow pilot has come to expect. For instance the Kiowa features a rudimentary HUD to replace the IHADDS display of the Longbow and the Black hawk has no HUD at all meaning that the pilot has to depend on the analogue gauges. Fortunately these are crisp and clear. The different helicopters have subtly different flight models. The Blackhawk as befits a flying Transit van has a stolid flight model and is a breeze to fly. The Kiowa by contrast is skittish and needs a firm hand to point it in the direction you want to go. It may just be the long hours I spent playing the original Longbow coming into play but I still find the Apache the most satisfying to fly. There's a couple of slight funnies about flying the choppers. The Blackhawk for instance features three indicator lights designed to show when you have overstressed the engine. If you want to keep your crew chief happy, don't engage autohover because invariably when you do, the autopilot whacks the collective right up and sets these lights glowing like Christmas trees.

There are three campaigns, though two of them are based in the US training area against US and foreign equipment respectively, and in each of them, the player is given control of four FARPS (fuelling and rearming points) located along a part of the front-line. Each FARP has certain aircraft, stores and personnel allocated to it and can launch a flight of two aircraft at any one time The player has missions allocated by the brass and can use the limited resources available as they like to complete these missions. By and large, this works pretty well. The missions come preplanned so if they prefer, the players can opt to skip the mission planning and strategy stage completely and concentrate on the flying. Conversely, control freaks can go completely to town and jiggle the personnel, aircraft and waypoints of each flight. Because the player only has a limited number of aircraft and weapons available, some agonising decisions are called for. Will a Longbow without radar be able to complete this mission or will one of the precious radar equipped ones have to be used? Radar guided Hellfires are always in demand. Will you be able to get away with using laser guided ones? Should you use one of the experienced crews for this mission or should you blood a rookie and give your personnel pool more depth? Decisions, decisions.

I mentioned earlier that one of Longbow2's improvements is a fully functional mission planner. Whenever the subject of mission planners comes up, one's thoughts naturally turn to Tornado the vintage sim from Digital Integration which contained what came close to being the perfect mission planner. This fine piece of software has never been improved on (even, strangely, by Digital Integration) but with Longbow 2 we have a flight planner which if not improving on Tornado's at least equals it. All the facilities you could hope for are there including the ability to create a profile of your projected course to warn you about where the especially lumpy bits are and it is just as easy to created flightplans for the other aircraft under your command as it is to create your own flightplans.

If you liked the first incarnation of Longbow, you'll love this. Rush out and get it right now. If you have a hankering to fly a helicopter, get it. If you've never bought a flight sim in your life because you think you might not like them, get it. Getting the message?" Yet another masterpiece from master designer Andy Hollis.

The first week i had my new computer, my brother purchased this game and many others to play on. We played each one happily, until we got to this. The intro kicked in, and played on, showing happless soviet helicopters being mowed down by countless apaches. We looked at each other, stunned, and gulped as we clicked through to the single player training. We laughed, we cried and we urinated ourselves as SAM warnings bleeped like a dying mongoose. The game itself is superb. It has stunning graphics, even now, and seems to impress me every time i think aboutt it. The game is very much reminiscent of Gunship 2000, the ultimate Amiga helicopter sim. I actually spent god knows how much money upgrading my Amiga to run it. Longbow however, doesnt really need amazing specs. Even though my old computer was terrible, even for its time, it ran very smoothly, even with high detail. In the game you have four helicopters to choose from; The AH-64A, The AH-64D Longbow, The OH-58D Kiowa Warrior and the UH-60 Blackhawk. Before each mission, you could also arm your helicopters, and if yo had the Longbow, you could use the awe-inspiring Hellfire-2, which basically, you could fire off and blow apart a whole platoon of tanks, with your loadout. The game has superb graphics, excellent sounds, realistic gameplay and hard AI. 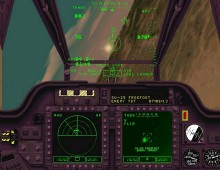