The successor to Gunship, it really isn't as recent as the name suggests, but rather a 1993 implementation of the Gunship concept. You get some VGA graphics, which are much better than those in the original, and decent sound. You have 2 campaigns to fight, flying around in helicopters ranging from feeble MD500s to Apaches and Comanches. The Islands & Ice addon gives you another campaign and some new stuff to blow up (or be blown up with). Flight modelling is decent, but not very realistic, portraying some characteristics of helicopter flight. There?s a large array of weapons at your finger?s disposal, ready to relocate parts of the surrounding landscape. Avionics modelling isn?t really realistic, but will do.

What this game has for it is playability, some decent graphics and unusual choppers (MD500 and Blackhawk). Recent similar games include Longbow 2 (which is still the best helicopter sim bar none, good for both novices and experts alike), and Apache vs Havoc.

This came out in the early 90's and as a 14 year old I remember thinking at the time that the graphics were awe-inspiring. By today's standards (and things have moved on a bit since the PS/1) things of course are looking a little chunky and 'pixilated', however unlike myself it has grown old a lot more gracefully then most - it is still hugely playable.

If like me, you don't take your flight simulators too seriously, you probably enjoy the "how big an explosion can I make? How many fun ways can I find to crash the helicopter?" school of flying. In this respect it also has a lot to recommend itself. This is partly because are several helicopters to choose form. As a proper geek you will probably already know their names and specifications, but if like me you do like flying into mountains you will probably pick the ones that you recognize of "Apocalypse Now" or "Blackhawk Down" ...either way you'll be happy. There is also a large array of evil weapons, most of which are designed for specialist mission-related roles, but most of which are equally well suited to being used for pot-shots at your base when you can't be bothered to fly anywhere.

The interface can be a little clumsy at times, because these were still the days of keyboard overlays. You will need one (or at least a list of buttons), because trying to decide at crucial moments whether it's 'G for gear', 'W for wheels', or 'L for landing-gear' when you've just returned from your victorious murder-spree is not such fun when you crash into the ground like a rock - usually only to discover that that particular aircraft actually had landing skids. Overall though it is not a major problem, the time-accelerating '{'button is a real boon when you get board flying for long distances with no action (e.g. usually when lost).

Antics aside, for 'serious' missions there is a lot to keep you busy, with a large range of air & ground targets to pick off, including the odd warship ...you can also pick your own funky squadron name to make yourself sound really hard (e.g. the "Fighting Viagra's" or something similar). In summery though: "Loads of fun to be had with your enormous chopper!!" - Recommended! 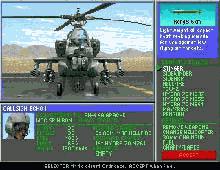