Updated version of Dynamix' oldie flight sim A-10 Tank Killer from 1989. This one was released after their huge success with Red Baron two years later and features additional missions including a Desert Storm scenario, overall improved graphics and sounds. But essentially it is very much the same game. Unlike the old version, this remake doesn't require a slow-down utility... or sort of as there are still lots of problems on modern machines such as messages disappearing too fast or some unusal behaviour on take-off. But you can fly without going 60000 mph or making 50 left-turns when pulling the stick left for a second on a fast Pentium. A must-have for all fans of World War sims. 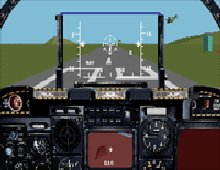 People who downloaded this game have also downloaded:
F-15 Strike Eagle III, A-10 Tank Killer, Aces of The Pacific, Aces over Europe