Aces over Europe is a great follow-up to Dynamix' first World War II combat flight sim Aces of the Pacific. Playing in the European theater of war, you have the option to fly either for the German or British air forces. Yet again many different planes made it into the game, which boasts even better graphics, more varied missions, and a more comprehensive career mode than Aces of The Pacific. Recommended for WWII flight sim fans. :) For similar games take a look at Rowan's Reach for the Skies or Microprose's 1942: Pacific Air War, if you prefer the Pacific theater. Aces over Europe requires heaps of conventional memory, so make sure you read the FAQ for pointers on memory management for DOS games. 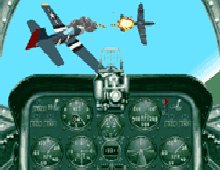 People who downloaded this game have also downloaded:
Aces of The Pacific, Red Baron, A-10 Tank Killer v1.5, Command Aces of The Deep