If You ever wanted to fly a WW1 double-winged airplane then try Red Baron - the best of its kind. Play a career either as a German or British pilot and do Your best to complete missions. More than 20 different planes, many different mission types, historical pilots, realistic or arcade flight modes... If You're good enough, try to defeat the Red Baron himself...Good luck!

This is one of the simulation games you cannot miss. The game feature great graphics together with nice sound and the overall game is very realistic especially when you consider the time it is from. Your plane is rather simple all though you can choose between many different ones. So don't expect any laser weapons or huge missiles.

All you got is your little machine guns on the front of your plane. The game is much fun, all though it's rather difficult and might scare away new players. So my advice is that you give the game a second chance when you try it out.

I am usually not one of the biggest fans of Flight-Sims. My idea of this genre is flying an X-Wing, not a real plane - and now this! Hard to imagine anything that doesn't have a radar and gets pretty angry when you try to climb too steep. You really got to fight with your own machine and try to fight off some pretty intelligent flying enemies you sometimes don't see. You have to move your head (with F1-F4) to keep an eye on them. You only got your machine gun to disable enemy-planes. Man, that's hard work! And we aren't even talking of mastering a plane that's losing oil and/or fuel - sometimes you yourself are shot and have to try hard to keep your head clear. You tend to faint when you are doing some maneuvers - your sure end!

Never ever played such a realistic and involving game - it's brilliant! The only downpoint is the high difficulty. Pretty soon you will find yourself fighting against 4 airplanes, one groundflak and still trying to shoot down balloons. I'm not a friend of wargames as such, but a game about the airfights of Worldwar I is something unusual - especially when this game came out You really shouldn't miss this one. Best thing - this one has been released and is now freeware.

Arguably the best WW1 flight sim ever made, Red Baron is the legendary game from Damon Slye of Dynamix. Offering you the chance to be a pilot in World War One, Red Baron featrures 28 different aircraft from both the Allied and the German sides, a superb career mode, and a diverse array of missions including dogfights, balloon-busting, zeppelin hunting, escort, and more. If my saying "best" multiple times won't convince you, here is a good review at MobyGames that should:

"I'm a fight sim junkie, I try them all. Technically this one isn't the best; the physics are only so-so, there isn't a lot in the world other than the planes, and the missions are all canned. And being on a PC in '91 you get lousy graphics and sound too (compared to the Mac of the same era). Normally this would result in me trashing the game, but I can't, it's probably the best one I've ever flown. That's because of the way the game draws you in.

The campaign system is flawlessly executed and follows you through the war, offering promotions, movement to "expert" squadrons, even personal challenges from pilots on the other side. I had two of these, in one a French pilot challenged me and I won after having to hide out in some clouds for a while. In another I showed up and he brought his entire squad with him - but I was flying a Triplane so they didn't last long. An example of the depth is the way your plane is handled. Once you've done well enough you are allowed to start requesting the newest models from the factories, and even get to paint them the way you like in an editor. I haven't seen that anywhere else. As to the rest it's all "good enough". There's enough planes in the air at once, enough types of them, enough types of missions, enough AI, enough of a flight model etc. They did just enough to make the engine work, and when combined with the campaign system the whole thing just lit up.

I think the only real flaw was the rather poor "world" outside the planes. Basically there wasn't one. Dipping below 10000ft put you in this netherworld where nothing happened. Perhaps more annoying is that the missions are completely hard-wired with absolutely no randomness at all. This gets distracting when you re-play them, which you will. Hellcats had this one beat.

Also the AI was good for its day, but didn't show enough variance for different famous pilots. For instance in one mission the Red Baron (I was now a member of the flying circus) got killed by flying directly onto the nose gun of a British bomber. I was stunned so I tried it again,and the same thing happened. That's somewhat annoying considering that the Baron was famous for "hanging out" way above the fight and then coming down when planes attempted to leave combat. I suppose this isn't a trivial issue considering the machines of the day, but I did find it distracting."

If you like flight sims only a little, Red Baron is a must-have. It is an incredibly atmospheric game that is very accessible - I am no pilot, and yet Red Baron is one of a handful of flight sims I was compelled to finish.

Ah the memories of this game come flooding back almost immediately. I love this game so much. Quite possibly the best game to ever come out of Dynamix Inc. Most likely only rivaled by A10 Tank Killer.

I remember flying around shooting down planes as the Red Baron on my old IBM. These days we are getting our thrills from such games as Battlefield, Splinter Cell, Flight Simulators; sometimes it's good to look back on games such as Red Baron and A10 Tank Killer as a reminder of the primitiveness of computer games in the late 80's and early 90's.

The game play is all-round smooth and exciting, both hardcore and non-hardcore gamers should really enjoy the experience of flying a double wing by-plane armed with a machine gun. Dynamix Inc was true masters in their time when it came to designing and creating flight simulation games. Even with primitive graphics the games created by Dynamix inc. are excellent in realism, physics and quality. Sure today's games are in 16:9 widescreen with HD graphics and you need controls with gyroscopes to effectively play them, but where did the transition from simple 16bit color and a large 2 1/2 pound desk mounted joystick take place?

This game takes me (and most of my friends who have played Dynamix inc. games before) back to the days of thirteen inch tube monitors and big clunky hardware, the times where your computer took five minutes to start and if your computer had 64MB of RAM, it was considered a 'rocket'.

This game is definitely best played with a joystick as it enhances the game play and makes for an all round better flying experience. You might even want to pull out that laptop with the first version of windows 95 and strap on those Skechers that have been all but forgotten in your mom's attic, sit down at your computer and take a trip back in time.

The game play is excellent and will keep you at your computer for hours. Use a joystick! If you don't own a Joystick, buy one! This game (along with the rest of the Dynamix.inc games) is a true gem from the 90's; it is also a fitting tribute to the amazing Red Baron who aced so many planes during WWI. This game is truly one of the best flying simulations from my early teen hood. Download it now! 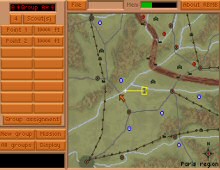 People who downloaded this game have also downloaded:
Aces of The Pacific, Aces over Europe, Wings of Glory