Last and best in Origin?s short-lived line of historical flight sims based on the Strike Commander engine, Wings of Glory is an excellent WWI flight sim that is considerably better than the fun-but-flawed WW2 predecessor Pacific Strike. The game took the story-oriented sim formulae of Strike Commander to new heights with intriguing plot and characters, solid flight dynamics, and great graphics. Here?s what the good folk at Games Domain have to say about this rare game:

"In the game you get in the shoes of (your name and call sign here), an American pilot who currently serves with Royal Air Force. You serve in one of the squadrons situated near the front, and from the first day, you start flying numerous missions against Germans. Wings of Glory (WoG) is a typical Origin game. While it sticks to the events which happened in 1914-1918, it also throws in a plot involving spies, German aces, and, of course (I say so because every Origin game that has plot has it) a death of one of your comrades.

The game plays very nicely. Plot makes it much more fun than campaigns in other "pure" flight simulators, and yet the game is a very good flight sim. All components of the game fit together very nicely, making the game smooth and fairly fast. And the air battles are so much fun! In addition to the full game, the game also features a Gauntlet mode and a mission builder (although not a powerful one). Your targets may include fighters (including aces, who fly _much_ better than other pilots), bombers (turrets are extremely dangerous), balloons, zeppelins, cars, trucks, trains, hangars, and other buildings. And the realism is very high. Once, I blew up a truck and the truck following the one I took out crashed into the debris and exploded too! Pilots scream when you shoot them down. Zeppelins slowly fall to the ground where they lay and burn. Bombers actually hit things (I've never seen a bomber hit anything in Dynamix's Aces Over Europe), and flak hits you (and quite often too).

On the ground, you have a choice of wandering around the barracks, going upstairs, or going to the hangar. In barracks, you can often talk to other pilots about life or talk to your CO (commanding officer) about the mission. You can also look at the kill board. Upstairs, you can load/save games or look in the mirror at your medals. In the hangar, you can chat with mechanics and, of course, pick an airplane you want to fly.

In the beginning, you only can fly in the Sopwith Pup. As the war goes on, you can fly more airplanes - RAF S.E.5, Sopwith Camel, Spad S XIII, and even German Fokker Dr. I. You can even get your own plane. Flight engine is very good and very flexible. Beginners can turn realizm way down, so that their bird behaves just perfectly. Veterans can crank it up. Options include pull from the engine (many airplanes will turn to one side faster than to the other), gun jams, wing shearing (wings will rip off if you fly too fast or pull too many G's), collisions, limited ammo, detail level (trees, clouds, terrain), and many more. The airplanes behave very differently - Spad is fast but horrible at slow speeds, Pup is maneurable, but it cannot climb. All airplanes are colored and some are colored in different ways. Cockpits are those of the real airplanes and, like in all latest flight sims by Origin can be turned off (you're left with cross hairs in the middle of the clean screen).

I welcomed WoG. My life was dull and sort of empty after I aced Strike Commander and the loading times of Wing Commander III weren't too appealing. Finally, the son of Strike Commander is here. Despite the lack of SVGA support, WoG shows off new cool graphics and deafens me with nifty sound FX and speech. Once you get used to the controls, the game becomes just lovely and really fast. I recommend it to any fan of Strike Commander, Red Baron, or any other flight sim, and to those who love action intermixed with good plot. 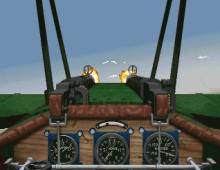