Gemini sector, 2696 AD. Terran frontier, somewhere between the Kilrathi space and the unknown. A lone trader is on his way to Mining station when a group of pirates shows up. After a short fight, the trader defeats the pirates, but one of the missiles hit a nearby asteroid. Or maybe it wasn't an asteroid! Looks more like an unknown, alien ship! Wing Commander: Privateer is one of my favorite games ever made. Set in the world of Wing Commander, Privateer puts you in boots of a Terran trader. Your job is simple - trade and try to stay alive. If you get bored of trading you might want to get some missions from a mission computer or one of the guilds. Join them, complete missions and earn easy money. Easy? I don't think so... Remember the "asteroid" that was hit by a missile? I can just tell you that you will have to deal with it through out the game. What is it? That I won't tell you. Download this FANTASTIC game and see it yourself!

Not quite expected add-on for the Origin's Privateer was not met with cheers at the time of its release, despite being quite good add-on. Introducing more technology and different approach to the mission choice, it was definetely worth the money Origin asked for it, only at that time quite a number of games released such add-ons and they didnt quite lived up to original game.

Still playable even now (and more than enjoyable), the Privateer Righteous Fire picks up where original title left off - right after the victory over the Steltek drone. Your alien cannon stolen and with no witnesses, you have to fight your way through old enemies - Retro cult. Highly recommended for playing, even for those who do not care much about flying games.

The year is 2669. You are an experienced space crewdog who has just inherited an obsolete Tarsus scout/merchant ship from your grandfather. With it and your few remaining credits, you decide to seek your fortune in the frontier Gemini Sector near the borders of human and Kilrathi space. Before your first deal, you are attacked by roving pirates. Being the hotshot pilot you are, you turn the tables on them. One of your missile shots goes awry, hitting a dormant object. It comes alive with an eerie green glow, and moves silently off....

So begins Wing Commander: Privateer, one of the best mercenary space combat games ever made. You are free to explore the Wing Commander universe by taking on the roles of merchant, mercenary, smuggler and/or pirate. There are always many missions you can choose from, and you can ignore the main plotline as long as you please by taking on less important jobs. The action takes place in the Gemini Sector, each quadrant in which is teeming with solar systems, Kilrathi and Confed ships, pirates, asteroids and other hazards. In turn, most solar systems are dabbed with their own planets, space stations and jump points to other systems. There are over 64 star systems you can explore, all adding to dozens of hours of sheer entertainment.

The space combat engine used in Wing Commander 2 was greatly improved in Privateer. While still relying on bitmaps, images are now sharper, details are much more abundant, and pixellation is greatly reduced in comparison to the WC series. Because Privateer takes place behind the front lines of Kilrathi/Confederation conflicts, ships you will encounter are also more colorful and varied, and loose-floating cargo items reveal a surprising amount of close-up detail. You will also see some stunning space station interior renderings and planetside city views; Origin evidently had a lot of fun with its in-house 3D rendering software.

The combat interface and flight model carry over from Wing Commander games and are very effective, although they still blatantly ignore the laws of physics (banking is impossible, for instance). Power management features borrowed from Lucasfilm's X-Wing have been added, adding a nice dimension of challenge. And as if all that isn't enough, the game also has a very interesting main plot that combines elements of political intrigue, backstabbing surprises, and sci-fi cliches into an absorbing space drama. My only gripe with the game is that the ending is rather disappointing, especially considering that the last battles are very difficult. However, the plus side is that the game is still playable afterwards, by accepting missions from the mission computer or Merchants/Mercenaries Guild.

With amazing graphics, strong "you are there" atmosphere, excellent plot, and best of all, a great sense of freedom in the vast gameworld, Privateer is a must have for every gamer's collection. It may have a flight model as realistic as Elite, or a trade model as captivating as Starflight, but at two o'clock in the morning, all you can think of will be how to roast that damn pirate ship to make nice salvage operation afterwards.

One of the best Sci Fi computer games of all time, Privateer puts you into the Wing Commander universe as a freelance character with the freedom to peruse any career path you wish. Be a pirate, a merchant, a bounty hunter, a smuggler, a patriot of the Confederation or even a Kilrathi sympathizer!

The game takes place in the Gemini sector along the frontier, about one year in the Wing Commander timeline before the destruction of Kilrah. Profit is the golden rule and morals are strictly optional. When not pursuing fortune your own way, the game offers an extremely compelling storyline for you to follow. Don't fail to download the "Righteous Fire" expansion to this game once you finish it for a whole new storyline and a heavily modified Gemini sector. 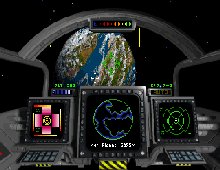