As a student at the TCSN Academy, you custom-design and fly unique combat, rescue, and search and retrieval missions from the CyberSchool's holographic simulator. You are trained in a variety of classes and exercises that will adequately prepare you for real-life combat in space. You will learn how to effectively navigate asteroid and mine fields, retrieve ejected pilots and data capsules from space, blow enemy capital ships out of space and defend your own space station against attacking forces. Using the same flight engine as Wing Commander 2, but allowing you to customize scenarios, Academy is an ok game with a limited play-time potential. With no real plot or destiny, along with no tie-in to the main Wing Commander storyline, Academy is just a game to beef up on flight skill.

Wing Commader Academy is a fun but overlooked 3D space shooter based on the Wing Commander 2 engine, released by Origin to appease fans who were anxiously awaiting the release of Privateer and Wing Commander 3. To prevent fans from crying "foul!" at this straight rip-off of the "simulator" practice mode in the original games, Origin added some new features. First off, there are two new ships, the Wraith and the Jrathek, for the Terran and Kilrathi sides respectively. The Wraith is a small but very fast fighter with two new weapons: a Reaper cannon and the Leach missile. The Leach missile adds a whole new dimension to dogfighting in space, as it drains all power from weapons and shields of any ship, including capital ships. There are also some new spacial effects, such as a burning sun and spinning planets.

Game play consists of two simple phases: Constructing missions, and then playing them. Missions can have up to four nav points each with its own set of enemies and objects such as enemy ships, terran ship, space stations, asteroids, ejected pilots and data pods. You can save up to twenty-four different missions which you can trade with friends or you can take on the pre-built simulation, the gauntlet, which consists of fifteen levels made up of three waves each in increasing difficulty. The higher levels are a true test for any Wing Commander veteran. Overall, Wing Commander Academy achieves its purpose of whetting the player's appetite for future games in the series. And the action is for the most part so engrossing that you won't even notice the lack of plot in this game. 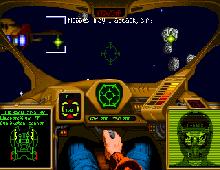