One of the best gaming compilations ever made that unfortunately attracted too little attention, Wing Commander: The Kilrathi Saga is a great package that contains the first 3 games in Chris Roberts' mega-hit Wing Commander series, each optimized (slowed down, essentially) to run on Windows 95/98 Pentiums. Greg Kasavin gave a very comprehensive review of the package as follows:

"The Wing Commander games still look fantastic. Each was visually revolutionary in its time, and glancing back on them shows exactly why: Colorful, carefully hand-drawn graphics are the pride of the original Wing Commander, while slick, pre-rendered spacecraft pave the way in its sequel. Wing Commander III presents a high-resolution, fully polygonal game engine with detailed, texture-mapped spaceships and a greater field of vision than any of its predecessors. But perhaps the most enjoyable element of The Kilrathi Saga is its audio. The memorable music scores of Wing Commander I and II, still a joy to beholdeven in original form, make a fierce comeback with this release. Completely remastered The Kilrathi Saga's restored soundtrack is truly awesome. The sound effects of the first two games have likewise been improved; the missile lock tone, for instance, sounds much better than before. Several other subtle enhancements and bug fixes are present in The Kilrathi Saga, none of which is particularly noteworthy.

Wing Commander: The Kilrathi Saga is a fine package for those who either didn't get a chance to play through the entire series, or for those longing to experience it again after all this time. All three games remain very playable and enjoyable even now, [more than a decade] after Wing Commander's 1990 release. A great deal of history hides in this package, as it takes you from the heyday of Origin's hand-drawn, animated artwork through the transition to big-budget full motion video. The Secret Missions and Special Operations add-on scenarios for Wing I and II are also available for download, thus ensuring you'll enjoy dozens of hours of topnotch space combat against those infernal felines."

It is only unfortunate that The Kilrathi Saga was largely overlooked in stores, parhaps owing to the higher-profile release of the inferior Wing Commander IV, and many people's misguided belief that these oldies will run fine on their new computers. Whatever the reason, Wing Commander: The Kilrathi Saga delivers true classics that are watershed in the crowded space combat arena. Don't call yourself a space action fan if you have never played these amazing classics :) 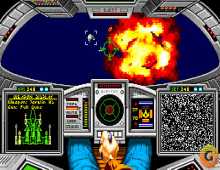