When Wing commander shoved up in 1991, it was a major breakthrough in PC gaming. It had FANTASTIC graphics, good sound and great story. It set new standards, which many tried to follow, but only LucasArts' X-Wing could compete with WC series. So, what is the game about? You're a novice pilot aboard TCS Tiger's claw. It is the time of war. War against Kilrathi, alien humanoid cats. Enough about description - just download this masterpiece and play it!

Wing Commander surely is one of those few groundbreaking games each genre has. One of those defining games like Civilization, Elite, Monkey Island - to make it short: future games will (and have been) measured against this. What makes this game so special then? Well, it is an involving mixture of action and science fiction story. You do not just fly one dull mission after another - you interact with other pilots, you see what's going on - you even got this nice game in the game (the arcade shooter - good for training!). The story around the battle with the Kilrathi, feline aliens, evolves from mission to mission. The graphics were remarkably good at that time although you don't get the "realistic" 3D feeling like in X-Wing for example. It's all just 2D trying to look 3Dish... but that very successful. Steering your craft does not work SO well with an analog joystick I have to add. Oh and also the game might run too fast on modern computers.

This is an uninstalled version - you will need to crack it with Rawcopy (get it at our Apps-Section) after installation.

Certain names in the gaming world resonate in our ears. The very name brings us back to a time long gone and memories faded. Memories of shocked disbelief that playing a computer game could ever be that good. Civilization does this, Quest for Glory and for some Heroes of Might and Magic. One other such name is Wing Commander.

Chris Roberts is best known for not creating games but creating universes. He is the genius behind the world in Ultima V and Wing Commander and it is for good reason that the motto of the, sadly deceased company, Origin was “We create worlds”.

With his 1990 game, Wing Commander, Roberts aimed to make a game that made players feel as if they were part of an epic movie like Star Wars. To this end the game not only has groundbreaking space battles in which you try to defeat wave after wave of enemy ships but adds more in the form of real mission briefings and conversations you have with shipmates as you relax in the bar or stroll across the flight deck.

Wing Commander was a revolution when it came out. Graphics, sound and gameplay, the three corner stones of gaming, were all raised to new heights. The VGA graphics were used in all its glory to tell an amazing story. It took years to make this game, unusual for a time where games could still be written by one man sitting behind his home computer (although that was already becoming a thing of the past). The reason for this were the many setting that were made for the game, each one painstakingly hand drawn into the computer. The labour paid dividends as even today I cannot help but be amazed at how the game looks even in it's cutscenes. It helps tremendously in immersing you into the story.

The story itself sounds unamazing. War has broken out between humans and an alien race called the Kilrathi bent on destroying the human race. The war has dragged on for decades and humanity is slowly losing the fight. This might sound like any other sci fi plot line but Wing Commander got there first to really tell it. You are kept apprised of how the plot unfolds by the dialogue and cut scenes, something never seen before to this detail. The game is simply huge.

And after that you strap yourself into your very own space fighter to bring it too the enemy. Wing Commander is not a 3D game but it tries to be. The game uses sprites for depicting the ships you see in combat. Not as detailed as true 3d objects seen in later games but this does help to maintain some cohesion between what you see inside and outside of the space battles. The missions are on the whole fairly monotonous. Fly to that point and destroy or drive off all the enemies you find there is about the only mission you will go on. The mission briefings before you fly add flavour to the mix as you know the reason behind the carnage. 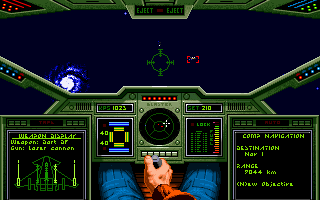