Wing Commander: Armada is Origin's answer to the wishes of many Wing Commander fans: the blend of multi-player head-to-head action and strategic elements in the race to conquer the galaxy. Beginning with just a single carrier in an unknown part of the universe, each player must explore the system, seeking planets rich in resources with which to build either a mining station, a defense fortress, or a ship construction facility. The player mines materials from planets, transports stockpiles by cargo ships or redirects materials for use in the current planet's shipyards. Resources gathered for constructing new spacecraft continue the cycle of exploration and combat as each player strives to build and maintain a fleet to take and hold territories. The universe is randomly generated each game, allowing for an infinite variety of paths to reach that final showdown.

The multi-player aspect of the game includes three different options: modem, network and a new split screen view that allows two players to compete on the same computer (i.e. "hot-seating"). New features include the "Invisible Cockpit" that gives the player a larger viewing area, actual 3D shields that protect your ship, an intuitive "Starmap" navigation/deployment interface, and a "TauntMaker" option that lets user customize digital taunts with other players. The game also boasts an improved 3D engine, with fully textured, light-sourced shaded spaceships. Finally, it's also the first Wing Commander game that offers you a chance to play the formidable Kilrathi. Overall, it's a great addition to the famous series that appeals equally to action gamers who like some planning in their game, and strategy gamers who don't mind some arcade skirmishes. 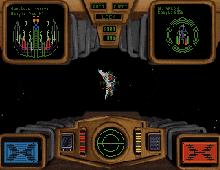