Privateer 2: The Darkening is an excellent sequel to Origin's classic Wing Commander: Privateer, although Origin made the unfortunate decision to sacrifice gameplay depth in favor of slick full-motion video sequences a la Wing Commander III. Which is not to say the The Darkening is a bad game. Far from it: it is fun, it has the best flight engine thus far in a Wing Commander game (until later releases like Prophecy anyway), it boasts excellent production value including an impressive cast (including Christopher Walken and John Hurt), it has an intriguing 'space opera' plot, and it offers dozens of challenging and lengthy missions.

So why is The Darkening inferior to Privateer? The answer, I think, is that the game loses the carefree, go-anywhere-you-want feel of the original game. Since Origin went the FMV route, where most missions are introduced and the plot unfolded via movie clips, this means the gameworld is much smaller than in Privateer, and the game much more linear. This limited freedom makes the game feel much more like a Wing Commander game than a Privateer game. Which is not a bad thing, except that one would expect the game titled Privateer 2 to be a true sequel to Privateer and maintain its freelancing spirit. There are still enough profiteering opportunities (buying & selling cargo between planets, for example), but the extent of freedom is much less compared to the original.

There are also other oversights that will irk fans of Privateer. One big blow that significantly reduces the replayability of Privateer 2 is the absence of RMG, Random Mission Generator. This feature is part of what makes the first Privateer so replayable. Playing the same missions over and over in The Darkening, is naturally much more boring, so you would be less likely to re-install it after you beat the game. The game is also plagued with more than a few bugs, a sign that Origin rushed it out the door before it was 100% ready.

The Darkening does offer some big improvements over the original, although it is naturally to expect that: technology in 1996 is naturally superior to what Origin had in 1993. This means you will be treated with great-looking 3D graphics, and a great flight engine that would set the new standard for all subsequent Wing Commander games. Despite a smaller gameworld, there are more ships to pilot and destroy, and more planets you can land on. Overall, The Darkening is a great game with top-notch graphics and acting (missing from this CD-rip download to to huge size - multiple CDs original). If you regard the game as a plot-driven Wing Commander game than a true heir of , Privateer's free-wheeling spirit, you will have a blast. Highly recommended.

You are Ser Lev Arris in this "sequel" to the original Privateer. Go on a search to regain your identity and memory in this interactive movie/space combat game. Along the way, you can trade commodities, go on missions, attack strange mutants, rescue damsels in distress, meet weird characters, and visit unusual planets. You can hire wingmen and cargo ships, upgrade your ship or buy new ones, and watch lots of live-action movies. 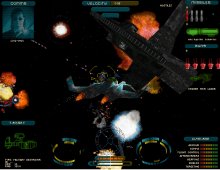