So you think you're a hotshot pilot. A clever entrepreneur. A notorious pirate, you've destroyed the Steltek Drone, secured the alien artifact, and outfought ond outsmarted everyone in your way. Now, you're taking a well-deserved break on one of Gemini's pleasure worlds. But relaxation will soon be the lost thing on your mind...

In Righteous Fire, an unexpected add-on to Origins' excellent Privateer, you are once again transported to the seamy side of the universe, where you discover a fiendish plot that threatens the order and prosperity of Gemini Sector. Whether you're a merchant, pirate or mercenary, plenty of action awaits if you're willing to risk all you earned in Privateer. You can extend the career of your original Privateer character and ship as you undertake new money-making journeys through Gemini Sector. And while you're wheelin' & dealing', you will unveil a startling discovery as you find out why law and order are dissolving into chaos....

Games Domain's review echoes my thoughts about the game: "[Righteous Fire adds significant play areas and enhancements to the original Privateer game.] There are three areas of change: 1) Kill breakdown: you can now see how many of the various types of factions' ships that you have knocked off. This also shows your current relationship to these factions. This is a great boon in trying to figure out how to restore friendly relations with some factions, as this is based on kill ratios that you have run up of one faction vs. another. 2) Ship enhancements: Seven enhancements for each major ship component except scanners. Some have very subtle or hard to detect changes, while others are really clear - like better shields and armour. These all cost but for those who have run up the bank accoutn in the original, these are all immediatly available. 3) Keyboard: there are now keys for increasing shield level step by step instead of having to wipe out your shields and then select highest setting to step backwards. There is also a key for setting throttle to maximum instead of having to hit the + key repeatedly.

Fine. Now what was that about plot again? Origin probably listened to the complaints about a lack of freedom to manouver in the game galaxy, and decided to produce a multi-thread parallel plot. There is still a start and end point, but at the beginning, there are several multi-mission episodes that can be done in any order. You still have to finish all the missions in one episode before starting another, but at least you can choose which order to do them in. Once past the plot mid-point though, and the epsiodes come in strict order again.

The main enemy this time are the retros - this isn't giving anything away, it becomes clear pretty quickly after a couple of conversations with the entertaining series of bar-tenders. There is also a new ship type - not particularily effective - that appears irregularily. Finding the people to start the episodes is not obvious - you actually have to go looking for them. Trying all the main haunts from the first game is a good start but not guarenteed. Taking the missions offered by the mechants, mercenaries and mission computers will take you there eventually - just remember to keep checking the bars. The problems in basic game design present in the parent still remain. There is something definetly fishy about the Origin joystick routines. Many players complained about the difficulty of particular missions, and the enemy ship AI can reduce the player to just holding down the trigger button and attempting to ram - a not ineffective tactic, and how I finished the final mission. However, the image of oars and a brass prow is not what I expected to be using my totally kitted-out Centurion for." 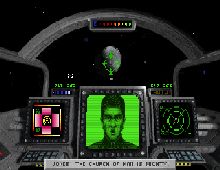