Every once in a while there is a game coming out that sets standards. A game going to the maximum of the possibilities - and then it just pushes them a bit higher. Chris Roberts managed to develop a game with such a high level of realism - great graphics, fantastic flight-feeling, involving storyline... When Origin presented the first demo of Strike Commander on the CES '91 in Chicago the magazines went WOW! - other game-developers asked "How the hell did he DO that?!" The magic word for that last question is RealSpace, a system developed by Origin that combines bitmap-graphics with polygons creating a complex landscape and other aircraft. Even today this game doesn't need to hide - it got a fantastic feeling and the graphics are superb.

Now many people feared that a game with graphics like this would ONLY rely on them. To make it short: it doesn't! The center of attention is a group of mercenaries in the year 2011. You fly missions against rebels, rivals, 3rd world dictators etc. - there is a wide range of missions and two jets you can fly, the F-16 and the F-22. One thing you always need to remember playing Strike Commander is that missiles are expensive (and not only missiles...) - you got to care for your finances - a skilled shot is much better than shooting wildly at everything that moves. You get a whole new dimension here. Management skills are needed and even some adventure elements are mixed into this innovative game. Just like in Wing Commander (who doesn't know that one?!) you can talk to many people - overall this adds a very personal touch to the game distinguishing it from "the usual flightsim".

Strike Commander is highclass in all respects. Although I am not a real expert of flightsims I surely know a classic when it hits my eye. Groundbreaking and breathtaking I'd say.

This sim is unique due to the fact that you are not playing a the role of a military pilot like in other combat flight sims. Instead, you play as the commander of the Wildcats, a struggling mercenary squadron operating out of Turkey, flying F-16 fighters. Although you are based in Turkey, your mission will take you to almost every part of the world. You fly, like the name suggests, mostly ground strike missions. However, you can always count of some air-to-air encounters in your missions. This adds another twist to the sim, because if you are intercepted in your way to the target, you will have to fight in a disadvantaged position (you're carrying all kinds of bombs, while your opponents don't). You are paid for completing your missions, and use the money to finance your group (i.e., buying more weapons). It is therefore advantageous to become adept at destroying targets using cheap weapons to maximize your profits (e.g. using Mk 82s instead of GBU 15s). Graphically, Strike Commander was a generation ahead compared to its peers. Like all Chris Roberts' sims, Strike Commander also have a rather interesting story, although might not be as deep as the Wing Commander series. All these aspects are blended together to give a very pleasant gaming experience.

Strike Commander is not the "purist's" sim like Falcon 3.0. The flight, avionics and weapons modelling is not that convincing. However, it still offers a unique twist to combat simulations, and will give you a lot of intense dogfighting action. If you want to experience a sim that "dared to be different", you cannot go wrong with Strike Commander. 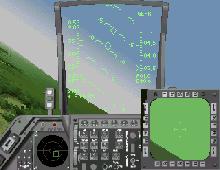