Command Aces of The Deep

Command Aces of the Deep is an excellent Windows version of Dynamix acclaimed WW2 submarine sim Aces of The Deep. Although CAOTD is too similar to its predecessor in terms of gameplay and scenarios, it goes above and beyond most other games that were given a facelift during the transition from DOS to Windows. In addition to keeping the riveting gameplay from the first game intact, CAOTD adds a lot of great bells & whistles that take full advantage of CD-ROM capacity, including computer-rendered images of all vessels, U-Boat history, interviews, and a photo tour. (These are the reason you should hunt for the real copy instead of playing the CD-rip version found here ;)).

As for how good the game is, excerpts from review at SubSim.com say it al: ?[Command Aces of the Deep] is intended as a historically accurate WWII U-boat simulation, with very little left out. Where many sims have one foot in the game category, Command Aces is pure sim. The three mission formats, single, historical, or the challenging career mode are present. You can start off at the outset of the war and you'll be assigned a Type II boat with meager capabilities and range and only two forward tubes (six torpedoes). But the escorts are none too intimidating at this point, so your deficiencies are nicely balanced. From September 1939 until well into the early forties you'll encounter many lone merchants--easy pickings! But in perfect accordance with historical precepts, from 1943 on the going gets tough and the convoys are well escorted by destroyers and corvettes with radar. In May 1943 you will be besieged by radio messages from fellow U-boats telling of attacks by aircraft and destroyers (Attacked by aircraft. . . sinking. . . U-344), and you get the sense that now the hunters have become the hunted.

The graphics are fairly good, especially the sea motion. Large rolling swells rock your boat. The enemy ships are well-rendered (see drawbacks below for more), and can be picked out easily at night. The moon and sun rise and set accurately, and you can play the moonlight to your advantage. German torpedoes were fairly powerful and accurate (except a brief interlude early in the war). Other nice touches abound. On board is a phonograph, as in Das Boot, allowing you to treat the crew to a wide selection of standards, including "Tipperary". The Aces of the Deep theme is a very rousing piece of music of itself. A chart of the boat illustrates the condition of the vital equipment. You can opt to have the crew speak to you in German or English, and their inset photos look very authentic. One crew member is a bit worrisome, demanding you surface the boat whenever the first damage occurs.

With the Command version of Aces, you have: control of your deck gun; access to the Med (slipping past the British at Gibraltar is tough!); you can obtain a Type XXI elecro-boat, available upon promotion; and voice recognition. Supposedly you can set the program and issue most orders verbally. It's a nice thought but I couldn't get it to work reliably. As things began to get critical, my "Crash Dive!!" and "Set Course 3...4...6!" orders were met with a quizzical "What's that, Herr Kapitan?" Usually the game would end right there by ramming or my wife demanding I stop waking the baby with all my shouting. Thankfully you don't need to know German to swim.

...In the single mission you can specify a wolfpack and work this to your advantage. And you'll get a surprise when at a certain point late in the war a plane drops its bombs after your crash diving sub and your sound man reports the high speed screws of a homing torpedo! If you are fortunate enough to be awarded a Type XXI U-boat, you get a taste of what almost could have been. The capabilities of the German's advanced submarine, built late in the war and too late to become operational in large numbers, would have staggered any hunter/killer group. Most aspects of the game are historically faithful and realistic, with the exception of the chart/map view. As in Silent Hunter, you can get way too much information from the map, and using it to plot attacks is a cheat that takes a lot of the work and risk out of the sim. Use it sparingly, and be glad it's just a sim.

If there's a drawback to Command Aces of the Deep, it is the distance perspective allowed for the surface ships. The ships are rendered as tiny silhouettes at all ranges except right in your face. From 2200 meters and closer you can make out more details, but there is no substitute for the chart view and the sim-assisted identification. When the ships get really close, they become very "blocky" and parts of them disappear. The sounds -- enemy propellers, sonar, diesel and electric motors -- are of high quality, though they are prone to cutting out and sometimes lapsing entirely. Not big problems, especially considering the age of this sim. As mentioned, the crews' voices are rendered quite well, in American with German accents or in German. Your boat will begin to creak and groan once your surpass 160~170 meters depth.?

When all is said and done, CAOTD stands tall as an example of a submarine sim done right. Definitely the best U-Boat sim ever made, and one that no naval commander should be without.

Command Aces of the Deep was the first really good submarine simulation I ever came across. It forced a paradigm shift of my ratings of all previous subsims. CAOD was leagues ahead of the competition at the time of its release, holds its ground years later, and is a shining example of a subsim done right. It is one of the few sims whose rating hasn't slipped as newer and better sims have been created. SSI is working on a new version (Silent Hunter II) that promises to allow modem/network play and enable players to command destroyers and escorts as well. But until that day, I'll be prowling the North Atlantic on the bridge of my Type IX in Command Aces of the Deep, the best of all U-boat sims. 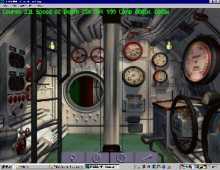 Command Aces of The Deep screenshot