Aces of The Deep

Following classic Aces over Europe, Dynamix moved from the heights above the ground into the depths of the ocean. Aces of the Deep is WWII U-boat simulation, putting you into the command of a German submarine. As with all other games in the Aces series, the game has been created with a lot of attention to historical detail. Offers you the choice of a challenging long-lasting career mode or short single and historical missions. Technically the game is excellent and able to create the atmosphere you would expect from such a simulation with good sound effects and great graphics, especially the wobbling sea-motion.

Overall, Aces of The Deep is another classy Aces sim that requires a fair amount of strategic thinking while successfully capturing the feel of the era. Great fun! BTW: You can still find your patrol area without the map. On the global chart, when you plot your course, the IDs are shown at the bottom of the screen. So with a little searching you can find your patrol area. This is the floppy-disk DOS version. There also was an updated Windows version released on CD-ROM in 1995 called Command Aces of the Deep, which you can download from this site.

Aces of the Deep was originally released for the DOS in 1993. Two years later, an upgrade was released and titled Command: Aces of the Deep. It is a single player game developed by Dynamix and published by Sierra On-Line. It was designed to be a historically accurate World War II German Navy U-boat simulation. It is the final instalment in a series of "Aces" titles, including flight simulations such as the Red Baron, Aces of the Pacific, and Aces Over Europe.

The beauty of Aces of the Deep is its historical accuracy. There are numerous historically based missions that put the user in charge of a German U Boat and charge him with replaying actual battles from the war. These are very realistic, and interviews with real German U Boat captains were even included in the original game.

The user can also choose single, random missions, and can choose from variations of three U Boats to command. Several more models were introduced in this Command version of the game. In the third mode, Career Mode, the user begins with a budding U Boat captain at the onset of his career. He will start with easy assignments, such as simple patrols and advance through successful commands. The captain will be promoted in rank, acquire medals and will be given the opportunity to command newer and better boats as he advances in experience.

Aces of the Deep also features a wide array of other ships, both enemy and allied. There is a ship or boat to represent nearly every function, ranging from oil tankers to powerful destroyers and battleships, and even aircraft carriers. There are also anti-submarine patrols and a variety of air support. All of the mech, aerial or naval, are historically based, feature accurate payloads and abilities, and appear in a historically accurate manner on the screen.

Because of its singular realism and historical accuracy, Command: Aces of the Deep is often considered one of the best submarine simulation games of all times, even surpassing Strategic Simulations, Inc.'s (SSI) Silent Hunter. With the re-release, the game featured much-improved graphics, which added nicely to the realistic effort. The sea motion and boat renderings are especially improved. In short, this is a must-have strategy simulation for sim fans, World War II buffs, and submarine enthusiasts. It is highly recommended for download. 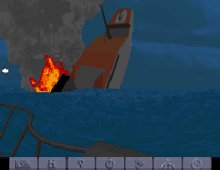 Aces of The Deep screenshot