688 Attack Sub is a classic modern submarine simulation which puts you in command of either the American Los Angeles or the Soviet Alfa class nuclear-powered submarines. Most of the systems you would expect such as sonar and periscope are featured and nicely presented in VGA. The game offers ten missions for both the Soviet and American side in a Cold War scenario, that grows progressively hotter. Nice to see that the two sides' submarines have their own graphic sets in the game, even with some pseudo-cyrillic labels on the Russian side.

Overall, 688 Attack Sub is an interesting early subsim and certainly a classic in the genre-- arguably the best subsim for PC until Dynamix' Aces of The Deep years later. Especially the modem-play option was outstanding for its time. Be sure to download the manual, although the game is well laid-out and can be controlled completly with the mouse.

Note: This is the full game and not the cut-down "Maxell" version found on some abandonware sites.

I can remember playing this game many years ago on the SEGA Megadrive (Genesis machine). I can't say i'm really a big fan of sub games or simulations in general but I found 688 attack sub to be a very playable and enjoyable game.

The plot is simple fare, you are the captain of either an American or Soviet sub and must play through a series of increasingly difficult missions. Graphics-wise the game was quite good for it's time, some of the fractal effects especialy were impressive. Those who like to tplay things at a slow, tactical pace will especialy like the game, and with many ways to complete each mission it's likely that you will through the game again when you finish it.

Overall an enjoyable game, although maybe not one that will appeal to everyone. 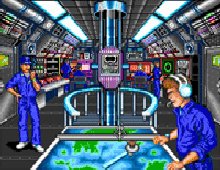 People who downloaded this game have also downloaded:
A-10 Tank Killer v1.5, 688 Submarine, SSN-21 Seawolf, Command Aces of The Deep