In general, naval battles unfold in a slower pace than other land or air battles. Two fleets might be searching for each other (or eyeing each other) for days before a final, fiery confrontation take place. This is even more correct for Submarine warfare. From the days of old U-boats to the age of nuclear fast attack boats, the art is more or less the same. Stay undetected while trying to detect the enemy, track him (sometimes for hours or even days) then strike quickly and leave the area. If the enemy fleet still has some ships in it, repeat the procedure as needed.

This translates directly to computer sub sims. While flight sims might lean a bit towards the quick-reaction action (yes, even for F-19, the "thinking man's sim"), sub sims look more like a chess or turn-based strategy/war game. Perhaps this is one reason why generally sub sims are not very popular among gamers. Only hardcore sub lovers will play them. Others consider this genre a bit boring.

This does not mean that ALL sub sims have to be boring. With careful design, some sub sims are actually interesting. Take Dynamix's Aces of The Deep, for example. Or the original EA's 688i Attack Sub. Or its second sequel, Jane's 688i. Second sequel, you said? What about the first sequel? Unfortunately the first sequel, SSN-21 Seawolf, is not all that interesting. It's use of multimedia (oral acknowledgements from your crew) is quite interesting. Graphically, it is a nice step up from the original. The issue here is with gameplay. With no introductory mission or quick engagements option, this sim has quite a steep learning curve. If you're familiar with sub sims, this might be okay. But beginners will mostly get scared away when they have to dive directly to the missions, although the missions are quite well designed.

That being said, this is NOT a bad game. It demands some serious dedication to master and enjoy, but if you are willing to put some effort into it, you might have a good time. However, another issue rears it's ugly head. If you are seriously interested in Fast Attack Sub sim, why not just go out and buy Jane's 688i? It has much better graphics, much better system simulation and much better gameplay. To top it off, it's now available at rock bottom prices! 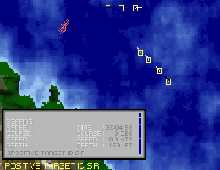