Epyx' Sub Battle Simulator is an early submarine sim that was quite sophisticated for its time. Included were the usual world war II theatres, and plenty of features which have been borrowed numerous times over the years by later submarine simulations. Sub Battle has much more depth than Epyx' surface sim counterpart Destroyer, with a lot of factual technical information being provided during the game. The excellent submarine history page at Subsim.com describes the game as follows:

"This subsim from Epyx was one of the early superstars. It first supported CGA and Hercules graphics, and was later updated for EGA (and really used EGA). Enemy ships were all black in color but had good and clearly recognizable forms. The user interface was executed beautifully. Control and status information was provided on one screen. A window within the screen features specific views such as radar, sonar, periscope, etc. It had four difficulty levels. In level four, one could see the rolling sea from the periscope.

The programmers get an A+ for overall scope. Sub Battle supported single missions or entire WWII campaigns in the Pacific or Atlantic. For the German side, Type II, Type VIIC, and Type XXI U-boats were available. For the US, your choice is between S-class, Gato class, and Tench class, with the mission determining the actual type used. All subs had reasonably correct specifications.

Sub Battle had an impressive list of features. The year the mission takes place determines the level of equipment available. Aircraft are present. If the sub is near the shore or a carrier, occasional patrol aircraft could cause a bad day at sea. Ships in an attacked convoy will change speeds and courses in an attempt to escape destruction. Damage a ship and its speed diminishes. Radio is used to give reports and orders, including downed pilot locations for pickup. Missions also include shore parties and minelaying. Many types of surface ships are featured, including battleships and carriers. This subsim sent so far as to include the sun and moon, even with changing phases.

A rough spot to note: The time "slow down" didn't work properly. After slowing down from accelerated time, a detected convoy might be too far out of range to plan an attack, whereas if you had been running in real time, you could have easily made the attack. But overall, Sub Battle shined." Definitely one of the first really good sub sims. 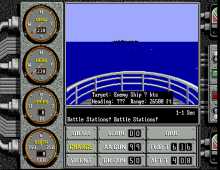 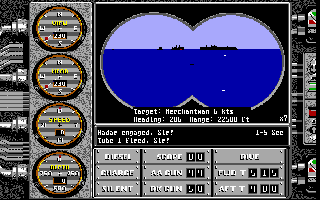