A-10 Tank Killer is a classic early flight simulator by Dynamix based on the Fairchild A-10A Thunderbolt II. Very nice graphics for its time and already showed some signs of the quality that made Dynamix popular with later games such as Red Baron and Aces over Europe. Overall it's not a game for flight-sim rookies due to difficult missions and fidgety controls. Check out the much-improved updated game called A-10 Tank Killer v1.5, also on this site. Requires a slow-down util on modern computers. BTW: The game uses lots of digitized pictures as menu illustrations. Something Dynamix did quite often back then. When you see these today, they look grainy and poor - nothing special. But I remember, back then when this game came out I didn't even have an Amiga and was still only used to 8-bit games, where such pictures were completly impossible. Seeing them in a computer games magazine caused quite some amazement... I feel old. :)

Flight Simulation of the A-10 Thunderbolt II also known as the "Warthog". Used mainly to weaken enemy tank units using a 30mm cannon, and for destroying roads and bridges 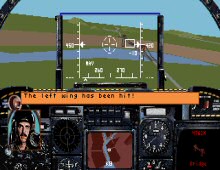