The successor to Apache Longbow, this ranks on my list as one of the best games ever. Ditching the ever popular Apache, one finds him/herself at the control of the gunship-transport hybrid Mil Mi-24 Hind, a Russian helicopter that handles like a barge, looks like the hunchback of Notredame, and is absolutely laden with firepower.

The graphics improved a bit from Apache, now sporting some textures, but not enough to make the game shine above Jane?s Longbow (the original one). Where this game really shined was the flight modelling and missions available. Since the Hind is essentially a brick with rotors, any mishandling will send you into the floor. However, this is a very fast brick, that can keep up with most enemy helicopters in the terrain. As the helicopter can carry troops, extraction and insertion missions will appear, forcing you to do some fancy flying in hot zones. Just don?t open the cabin doors while in-flight, or you may lose the infantry squad due to the evils of gravity.

At your disposal are several weapons all Russian in origin, from the flimsy .50 cal nose mounted gatling machine gun, to the almighty fuel air bomb, capable of levelling anything in its blast radius (including you, so drop only above 300m). Flight info is laid in the metric system, as Russian aircraft do, but not in Cyrillic, as in Flanker. Sound is decent, but, like in Apache, not exceptional.

The campaigns are semi-dynamic, which means that if you lose one mission, you probably see the same briefing as the mission before that, even though the enemy units are placed differently. There?s a narrator with a rbad Russian accent reading the briefings, but I recommend you turn the bastard off, as he is most annoying, as he will not mention your forces or the enemy without using some 2 or 3 adjectives before (?Our glorious forces have made the dastardly evil enemy fall back?, that kind of thing). The best campaign in my opinion is Afghanistan, where you?ll understand the dangers the Russians ran into with the guerrilla forces. You?ll find yourself very annoyed when you?re blasted into a million pieces by a little man, hidden with his RPG, who thought a landing Hind would be a nice target. There are times when the action will be so hectic that you?ll fly by instinct (and get appropriately killed).

I wholeheartedly recommend this game to anyone who likes serious sims, as it is really original and there nothing quite like it, with the exception of the Blackhawk missions in Longbow 2. 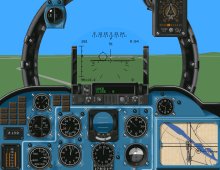